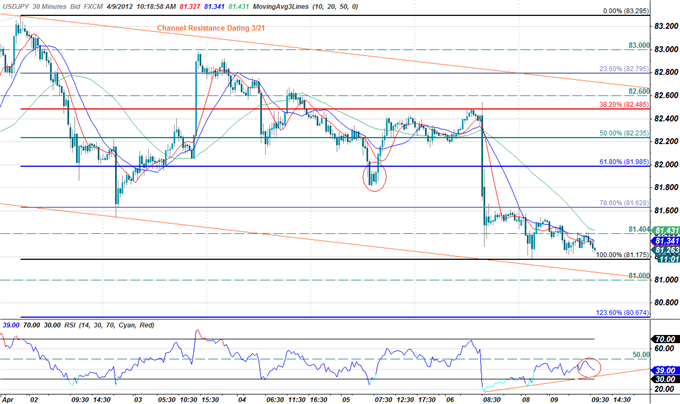 The Japanese yen is the highest performing currency against a stronger greenback in early US trade with the USD/JPY off by 0.42% on the session. Equity markets were off sharply at the open after a disappointing non-farm payroll report on Friday came in at 120K, missing expectations for a print of 206K. Classic risk-off flows have continued to support the low yielders with the greenback and the yen acting as the chief beneficiaries of haven flows with yen advances continuing to outpace those of the dollar early in the session.

The USD/JPY has continued to trade within the confines of a descending channel formation dating back to the 21st of March with interim support seen resting at the 100% Fibonacci extension taken from the March 21st and April 1st crests at 81.18. A break below this formation risks further dollar losses with subsequent floors seen at the 81-figure and the 123.6% extension at 80.70. Interim topside resistance stands at 81.40 with a break above the 78.6% extension at 81.63 offering further conviction on longs to the 61.8% extension at the 82-figure. Our medium-term outlook on the pair remains weighted to the topside with only a daily close below 80.70 negating our directional bias. 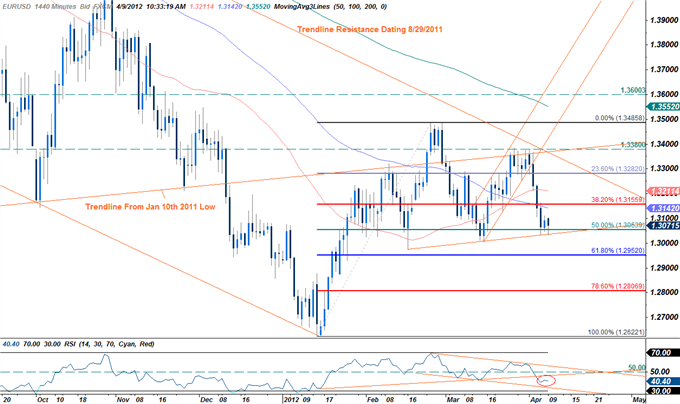 The euro is the weakest performer against the dollar with the pair off by 0.21% on the session. A daily chart shows critical support for the single currency at the 50% Fibonacci retracement taken from the January 16th advance at 1.3055 and trendline support taken from the February 16th low, currently at 1.3035. Daily resistance stands with the 100-day moving average at 1.3142 and is backed closely by the 38.2% retracement at 1.3155. Note that RSI continues to trade within the descending channel formation with only a breach above channel resistance negating our bearish bias. 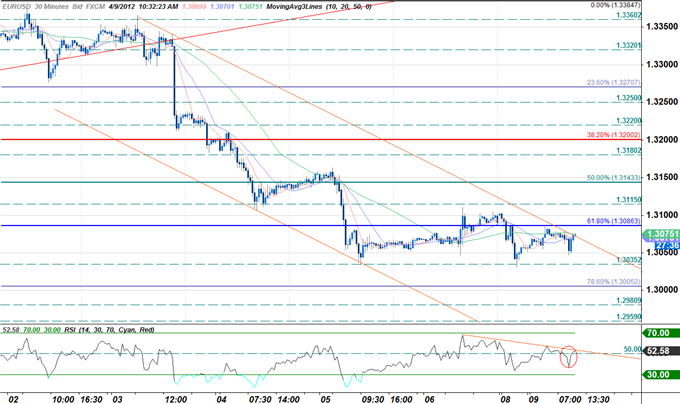 The intra-day chart shows the pair testing trendline resistance of the descending channel formation dating back to the April 3rd high after failing testing key daily support at 1.3035 in overnight trade. Interim support targets below this level are eyed at the 78.6% Fibonacci extension taken from the February 24th and March 27th crests at the 1.30-figure, 1.2980 and 1.2960. A breach above the 61.8% extension at 1.3085 negates the short-term bias with such a scenario eyeing subsequent ceilings at 1.3115, the 50% extension at 1.3145 and 1.3180. For complete scalp targets on the EUR/USD refer to last week's Scalp Report. Look to volatility in the pair to pick up tomorrow as European markets come back online from the Easter holiday break.