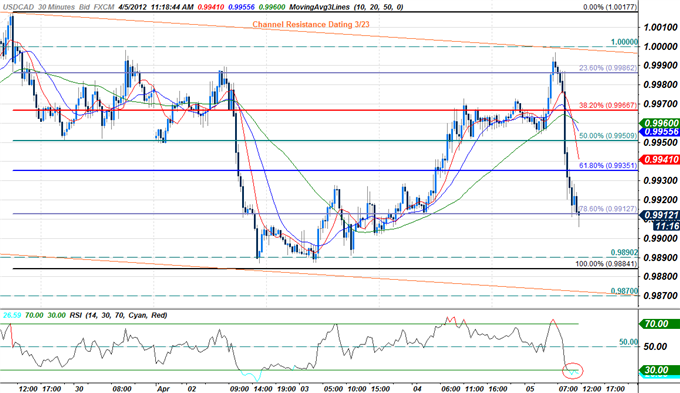 The Canadian dollar is the top performer against a mixed greenback at the close of European trade with the pair off by 0.56% on the session. Stronger than expected Canadian employment data prompted a rally in the loonie with the USDCAD reversing sharply just ahead of parity. Expectations for a print of 10.5K jobs were grossly underestimated with the report showing the addition of 82.3K jobs, pushing the unemployment rate to 7.2% from 7.4%. Relatively speaking, the pair continues to trade within the recent range it has held for nearly two months with key daily support and resistance resting at 9840 and parity respectively.

Intra-day support for the USD/CAD rests with the 78.6% Fibonacci taken from the March 23rd and 29th crests at 9912 backed by 9890 and channel support, currently around 9870. Interim topside resistance stands with the 61.8% extension at 9935 with subsequent ceilings seen at 9950 and the 38.2% extension just ahead of 9970. We remain broadly neutral on the pair pending a break above or below the aforementioned key daily support and resistance levels. 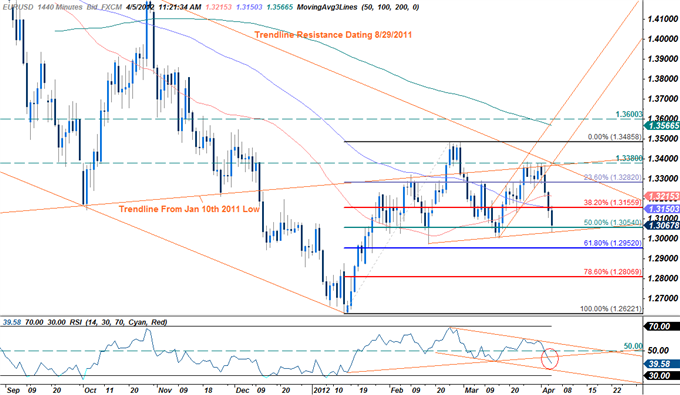 The euro is the weakest performer for a second consecutive day with the single currency holding below the confluence of the 38.2% Fibonacci retracement taken form the January 16th advance and the 100-day moving average at 1.3155 before encountering support at the 50% Fibonacci retracement at 1.3055. Trendline support dating back to February 16th has also provided support just below at 1.3035. We noted in yesterday’s Winners/Losers report that the break below 1.3155 was significant with subsequent short scalps playing out nicely in overnight trade. Note that an RSI break below trendline support dating back to January offered further conviction on our directional bias with only a break above channel resistance alleviating some of the pressure on the single currency. 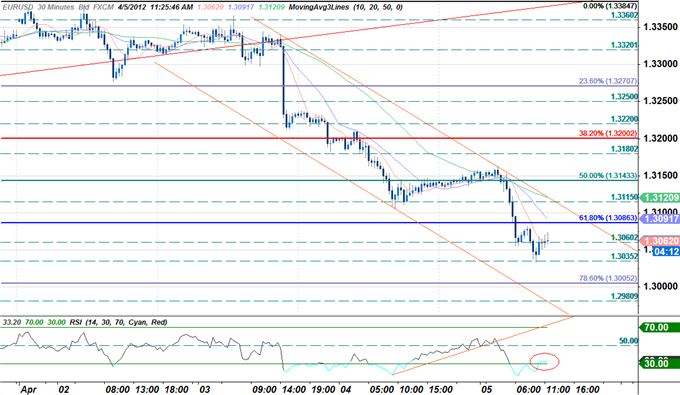 The intra-day chart shows the pair struggling to hold above the 50% Fibonacci extension taken from the February 24th and March 27th crests at 1.3143 before tumbling lower in European trade. Interim support rests at 1.3035 backed by the 78.6% extension at the 1.30-figure and 1.2980. Stronger support is seen lower at 1.2950. Topside resistance stands at 1.3060 backed by the 61.8% extension at 1.3085 and 1.3115. Look for the pair to largely remain in consolidation ahead of tomorrow’s highly anticipated non-farm payrolls report. For a complete report on the EURUSD scalp setup refer to this week’s Scalp Report. With US equity markets closed for the Good Friday holiday, thin markets may offer added volatility with the dollar likely react sharply to the print.

Join Michael on Friday morning for Live Coverage of the March NFP Print at 1215GMT (8:15ET)