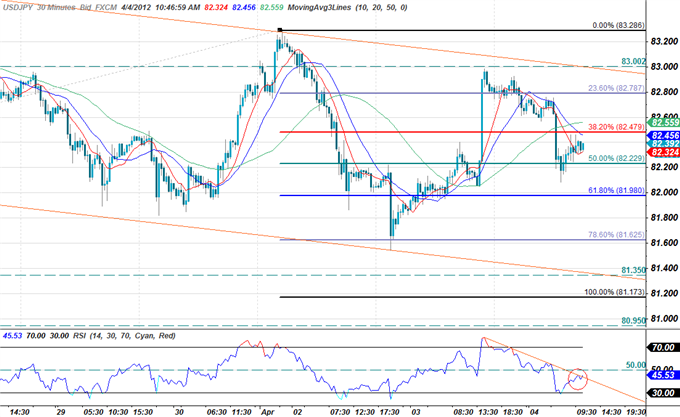 The Japanese yen is the top performer against a stronger greenback ahead of the European close with and advance of 0.55% on the session. The dollar continues to best all its major counterparts in early US trade save the yen which remains well supported on risk-off flows as traders continue seek refuge in lower yielding ‘haven’ assets. As we’ve noted in the past the yen has often outpaced the greenback on risk-off days with the USDJPY trading markedly lower today as equity markets suffer broad-based losses with the major stock indices off by 1.3-1.7% in early in the session.

The USDJPY continues to trade within the confines of a descending channel formation dating back to the March 21st high with a break above RSI resistance suggesting the dollar may pare some of the losses later in the session. Interim resistance stands at the 38.2% Fibonacci extension taken from the March 21st and April 1st crests at 82.50 backed by the 23.6% extension at 82.80 and channel resistance. A break back below 82.20 risks further dollar losses with such a scenario eyeing subsequent support targets at the 61.8% extension at the 82-figure and the weekly low at 81.60. Our medium-term outlook for the USDJPY remains weighted to the topside with only a break below the current channel formation negating our bias. The euro continues to suffer the steepest losses on the session after the ECB held rates at 1.0% in pre-market trade. Although the central banks was widely expected to do so, remark made by ECB president Mario Draghi warned that “Downside risks” prevail on the region’s growth outlook while citing that the upside risks for inflation remain throughout 2012. The broadly balanced tone suggests that although the central bank sees the risk for rising prices, the downside risk to growth remains the central focus for policy makers with the ECB likely to keep the door open to expand policy further.

The euro came off sharply with the pair breaking below key daily support at the confluence of the 38.2% Fibonacci retracement taken form the January 16th advance and the 100-day moving average at 1.3155. A close below this level risks substantial losses for the euro with daily support seen lower at the 50% retracement at 1.3055. Note that daily RSI continues to trade within the confines of a channel formation with only a topside break alleviating some of the pressure on the single currency. 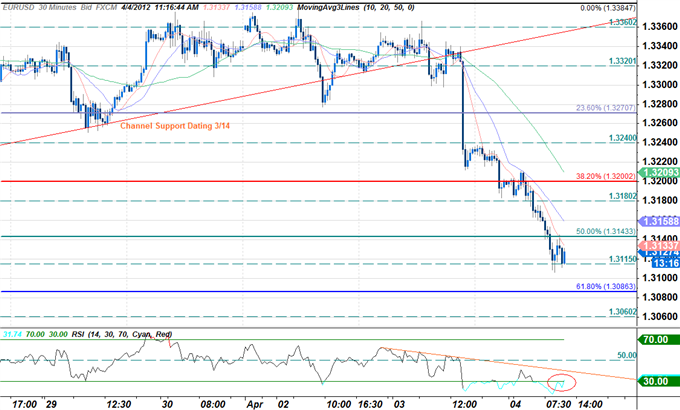 The scalp chart eyes interim resistance for the pair at the 50% Fibonacci extension taken form the February 24th and March 27th crests at 1.3140 with subsequent ceilings seen at 1.3180 and the 38.2% extension at the 1.32-figure. Interim support rests at 1.3115 backed by the 61.8% extension at 1.3085 and 1.3060. Note that RSI may look for another tag of short-term resistance with advances in the pair offering favorable positioning for subsequent euro shorts.