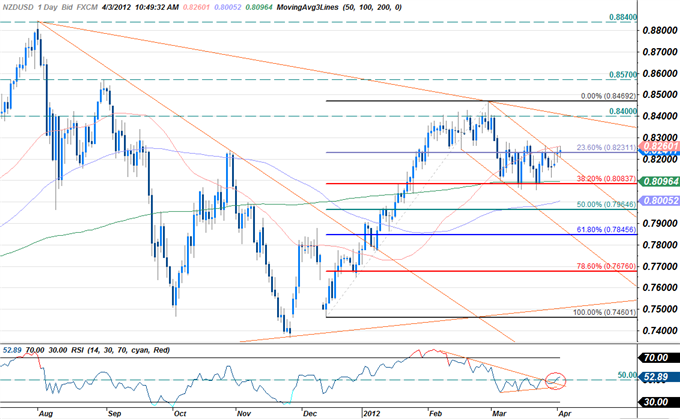 The New Zealand dollar is the top performer against a stronger greenback with the pair holding its ground for a fractional advance of just 0.04% ahead of the European close. Risk appetite remains heavy in early US trade with the greenback higher against most of its major counterparts as equity markets struggle to pare early losses. On a daily basis the kiwi is now flirting with a topside break of the confluence of the 23.6% Fibonacci retracement taken from the December 15th advance and channel resistance at 8230. Although RSI has now breached trendline resistance, the exchange rate lacks follow through with only a break above the 50-day moving average at 8260 validating the breach. 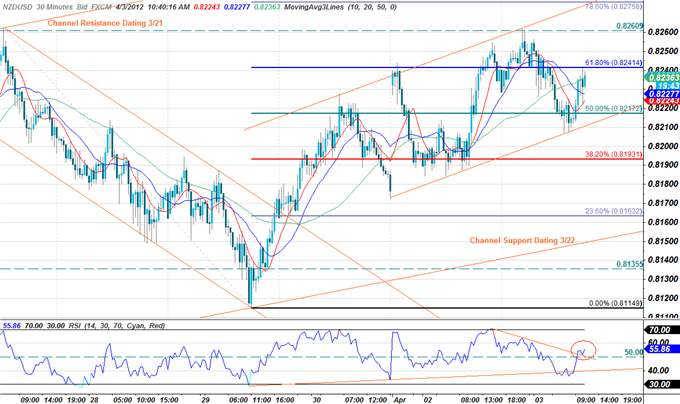 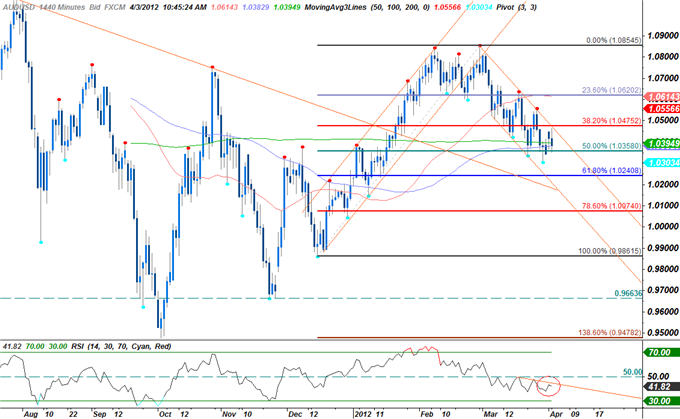 The Australian dollar is the weakest performer against the greenback with a loss of 0.45% on the session as the pair remains within the confines of a descending channel formation dating back to the 2012 high. Although the Reserve Bank of Australia (RBA) held interest rates as expected at 4.25%, remarks made central bank Governor Glenn Stevens cited that while the current policy remains “appropriate,” the board “judged the pace of output growth to be somewhat lower than earlier estimated, but also thought it prudent to see forthcoming key data on prices to reassess its outlook for inflation, before considering a further step to ease monetary policy.” The comments weighed heavily on broader risk appetite with the aussie reversing sharply just ahead of key resistance at the confluence of the 38.2% Fibonacci retracement taken form the December 15th advance and channel resistance at 1.0475. We reserve this level as our topside limit with a breach above negating our bearish bias on the aussie. Key daily support rests with the 50% extension at 1.0360. 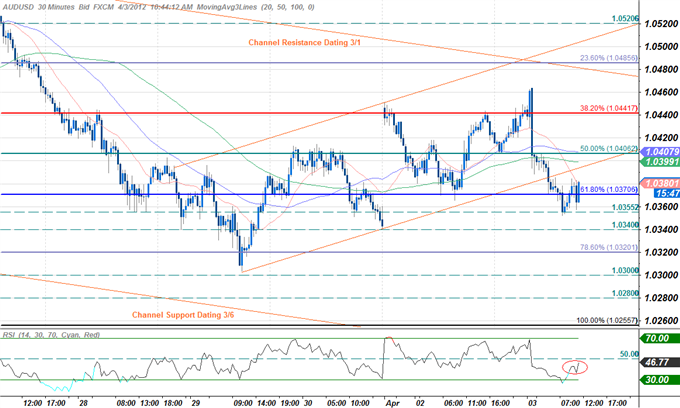 The scalp chart shows the AUDUSD breaking below channel support dating back to the March lows before rebounding off key support mentioned earlier at 1.0355/60. Price action lacked directional momentum in early US trade with the exchange rate currently straddling the 61.8% Fibonacci extension taken from the March 19th and 27th crests at 1.0370. A break below interim support at 1.0355 offers further conviction on our bias with such a scenario eyeing subsequent support targets at 1.0340, the 78.6% extension at 1.0320 and the 1.03-figure. Topside resistance stands at the 50% extension at 1.0406 backed by the 38.2% extension at 1.0440 and channel resistance dating back to the 1st of March (just shy of 1.0485).