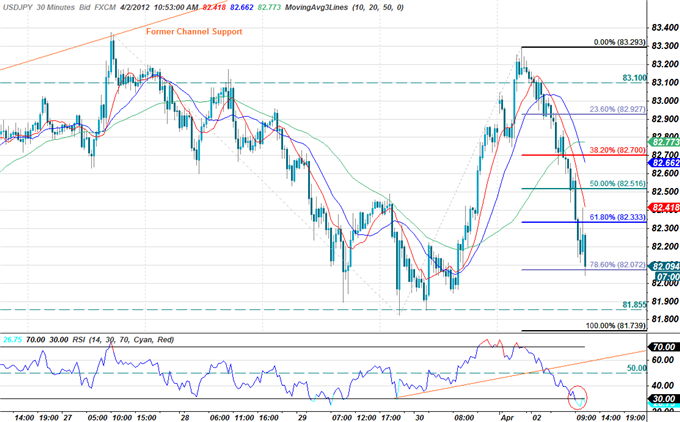 The Japanese yen is the strongest performer against a mixed US dollar with an advance of more than 0.58% on the session. Equities were weaker at the open after taking cues from weakness in European stocks with a stronger-than-expected print on US ISM manufacturing data prompting a reversal in stocks which turned positive ahead of the European close. Its worth noting that the yen has advanced agianst all its major counterparts in early US trade with a pullback of some magnitude likely.

The USDJPYplummeted throughout European trade with the pair encountering support at the 78.6% Fibonacci extension taken from the March 27th and the overnight highs at 82.07. A likely break here eyes intra-day targets at 81.90 backd by the 100% extension at 81.73. Daily charts suggest a break below 81.70 risks substantial losses for the dollar with stronger support seen lower at 80.50. Topside resitance stands with the key 61.8% extension at 82.33 with subsequent ceilings seen at 82.50 and the 38.2% extension at 82.70. Note that our loing-term bias on the USDJPY remains wieghted to the topside with dips offering favorable long-scalps. Only a break below 81.70 would put us on the sidelines with a move down to 80.50 offering ideal positioning. 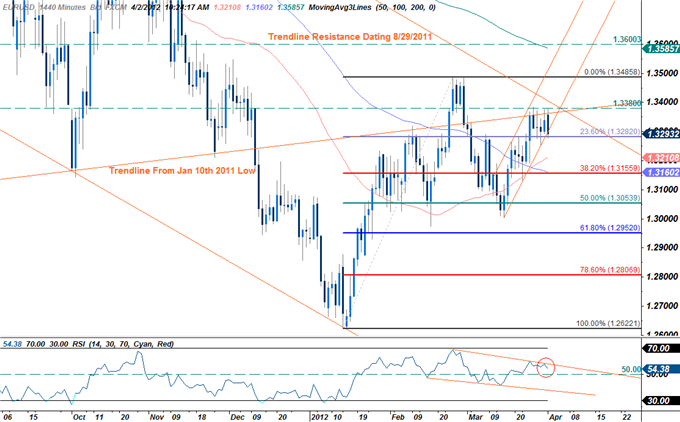 The euro is the weakest performer ahead of the European close with a loss of 0.34% on the session. The single currency continues to respect the 1.3380 topside resistance barrier with the EURUSD now testing critical daily support at the confluence of channel support and the 23.6% Fibonacci retracement taken from the January 16th advance at 1.3280. This level remains paramount with a break below eyeing daily targets at the 50-day moving average just above the 1.32-figure. Note that daily RSI remains below trendline resistance dating back to the February highs with a breach above negating our short-term bias. 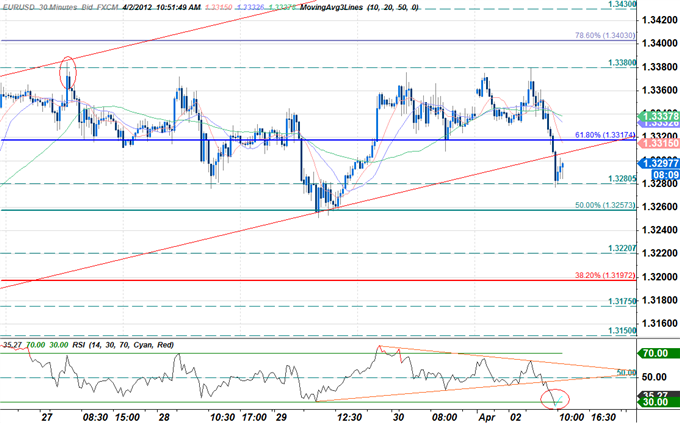 The scalp chart shows the euro breaking below channel support dating back to the March lows at the 1.30-handle before encountering support at the 1.3280 mark (Critical daily support cited earlier). A break below this level eyes subsequent floors at the 50% Fibonacci extension taken from the February 16th and March 14th troughs at 1.3260, 1.3220, and the 38.2% extension at the 1.32-figure. Topside resistance stands with the 61.8% extension at 1.3317 backed by 1.3280. Again we note a breach above this level negates our interim bias with such a scenario eyeing subsequent topside targets at the 78.6% extension at the 1.34-handle, 1.3430 and 1.3460. Note that the rebound in risk appetite should be respected with a run-up in the pair offering favorable short entries.