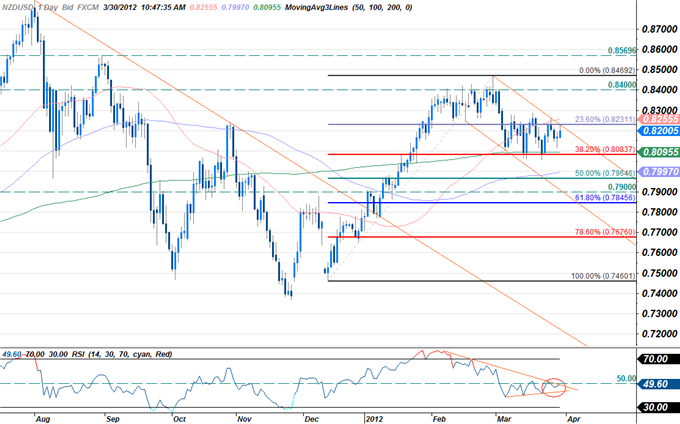 The New Zealand dollar is the top performer against the greenback ahead of the European close with an advance of 0.45% on the session. A look at the encompassing structure sees the kiwi continuing to trade within the confines of a descending channel dating back the February 29th high with the exchange rate testing critical daily resistance at the confluence of the 23.6% Fibonacci retracement taken from the January 15th advance and channel resistance at 8230. A breach above this level risks substantial losses for the dollar with such scenario eyeing daily targets above the 83-figure. Note that daily RSI seems poised for a break out of the wedge formation with a topside break offering further conviction on our directional bias. 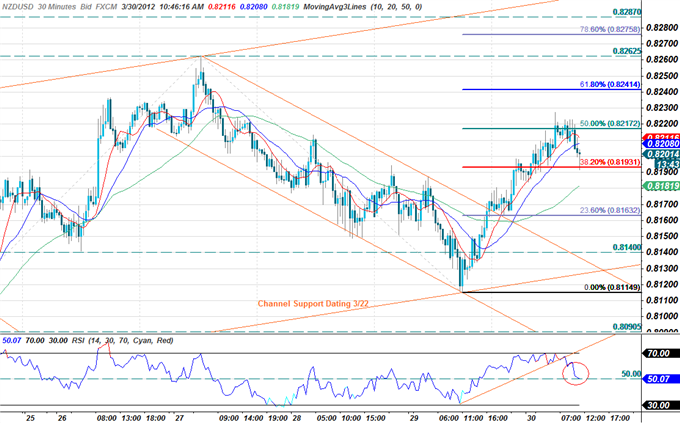 The NZDUSD broke above short-term channel resistance in overnight trade before rebounding off the 50% Fibonacci extension taken from the March 22nd and 29th troughs at 8220. Interim resistance holds here with a topside break eyeing subsequent ceilings at the 61.8% extension at 8240, the weekly high at 8263, and the 78.6% extension at 8275. Immediate support rests with the 38.2% extension at 8193 backed by the 23.6% extension at 8163, and 8140. A break below channel support dating back to March 22nd negates our short-term bias with targets eyed at the monthly low at 8060. 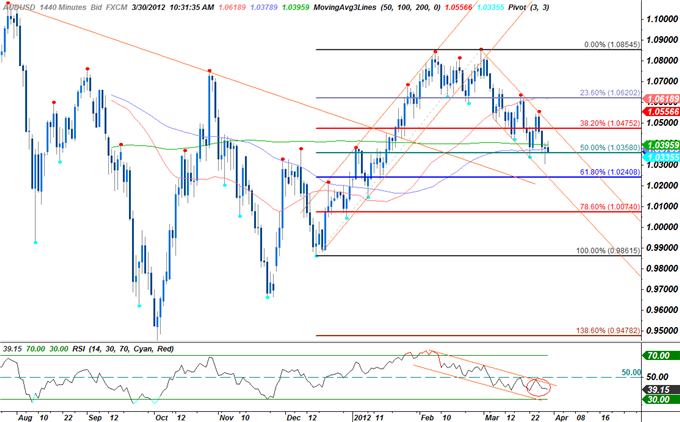 The Australian dollar is the weakest performer for the second consecutive session as ongoing concerns about a slowdown in China continue to weigh on the aussie. A look at the encompassing structure sees the aussie continuing to trade within the confines of a descending channel formation dating back to the February 29th high with the exchange rate testing key daily support at the 50% Fibonacci retracement taken from the December 15th advance at 1.0360. A false break below this level yesterday was sharply retraced with the exchange rate making another attempt at a break lower in US trade. This level remains paramount for the aussie on a daily basis with a break below risking substantial losses. Strong support is seen lower at the key 61.8% retracement at 1.0240. Daily resistance holds at the confluence of the 38.2% retracement and channel resistance at 1.0475. 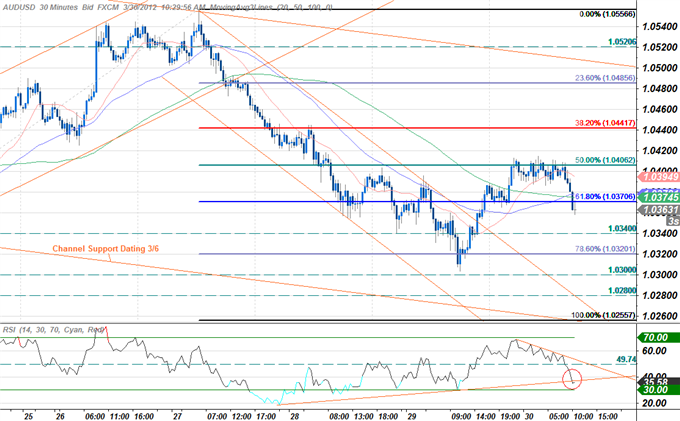 The scalp chart shows the aussie breaching above short-term channel resistance dating back to the March 27th high before encountering resistance at the 50% Fibonacci extension taken from the March 19th and 27th crests just above the 1.04-figure. Note that a break below RSI support suggests that the high yielder may remain under pressure in the interim with support targets eyed at 1.0340, the 78.6% extension at 1.0320 and the 1.03-handle. A breach above the overnight highs negates our short-term bias with such a scenario eyeing subsequent topside targets at the 38.2% extension at 1.0440, the 23.6% extension at 1.0485, and channel resistance.