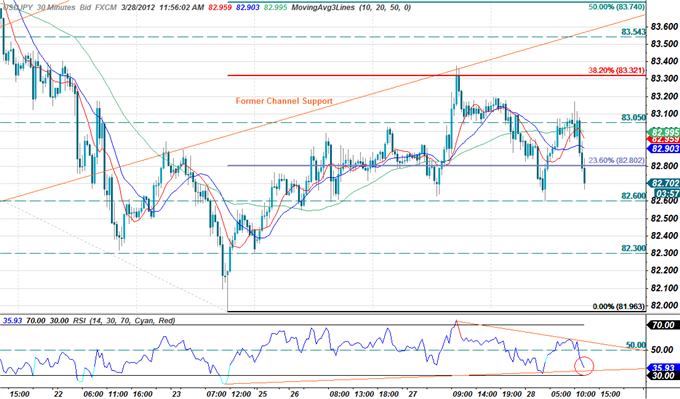 The Japanese yen is the top performer against a stronger greenback in early US trade with an advance of 0.50% on the session. Weaker than expected US durable goods orders today weighed on broader market sentiment with classic haven flows offering support for the dollar which advanced against all its major counterparts save the yen. Again we note that in risk-off environments yen advances tend to outpace those for the reserve currency as traders jettison risk assets in favor of lower yielding “safety” assets.

The USDJPY rebounded off the 38.2% Fibonacci extension taken from the March 7th and 23rd troughs at 83.30 yesterday before breaking back below the 83-figure in overnight trade. Soft interim support now stands at 82.60 backed by 82.30 and the 82-figure. A break below this level negates this current setup with such a scenario eyeing subsequent support targets at 81.70 and 81.50. Interim resistance stands at the 23.6% extension at 82.80 backed by the 83-handle and the 38.2% extension at 83.30. A breach above this level dispels further downside pressure and offers further conviction to our directional bias. 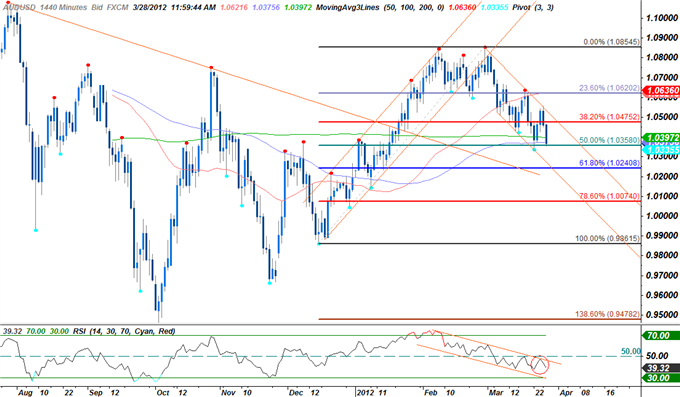 A look at the encompassing structure sees the aussie continuing to trade within the confines of a descending channel formation dating back to the February 29th high with the exchange rate testing key daily support at the 50% Fibonacci retracement taken from the December 15th advance at 1.0360. This level remains paramount for the aussie with a break below risking substantial losses for the aussie. Strong support is seen lower at the confluence of channel support and the key 61.8% retracement at 1.0240. Daily resistance holds at 1.0475 backed by channel resistance. 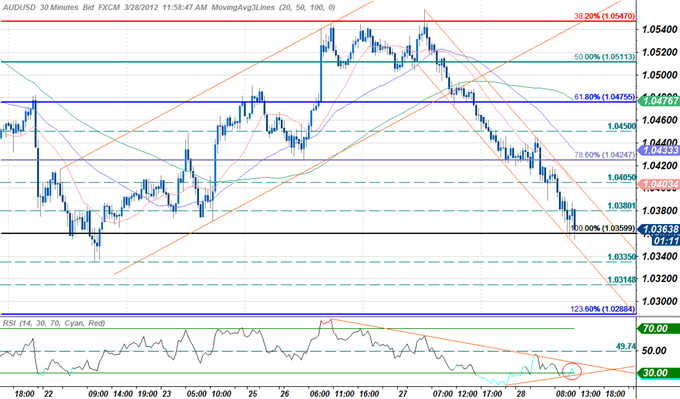 The scalp chart again highlights key support at the 100% Fibonacci extension taken from the March 1st and 9th crests at 1.0360 with a break here eyeing subsequent intra-day targets at 1.0335, 1.0315, and the 123.6% extension at 1.0290. Soft resistance stands at 1.0380 backed by 1.0405 and the 61.8% extension at 1.0425. We continue to favor short scalps so long as the encompassing descending channel formation is respected with a breach above channel support negating our short-term bias.