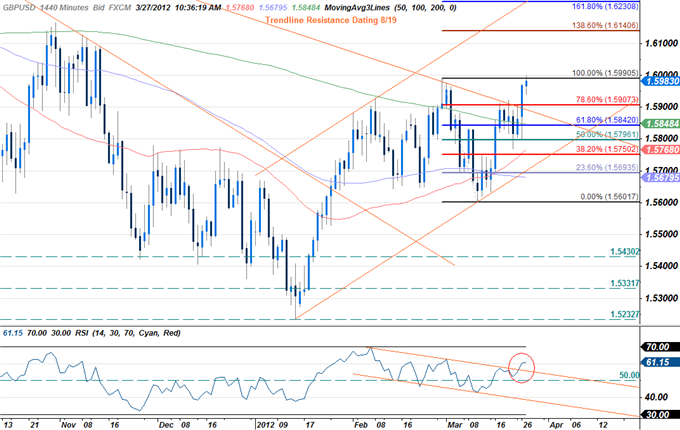 The British pound is the top performer against a stronger dollar in early US trade with a modest advance of just 0.07% on the session. The sterling failed yet another attempt at a breach above the 1.60-figure in overnight trade with remarks made by Bank of England board member David Miles offering some support for the pound after laying out a tentative exit strategy whereby the central bank would move on rates before winding down the massive balance sheet. A daily chart shows the pound breaking above the confluence of trendline resistance dating back to the August 19th highs and the 78.6% Fibonacci retracement taken from the February 29th decline at the 1.59-figure before encountering resistance at the 100% extension just shy of the 1.60-handle. This level remains paramount for the pound with a breach above eyeing topside targets at above the 1.61-figure. Expect consolidation below this level with our medium-term bias weighted to the topside. 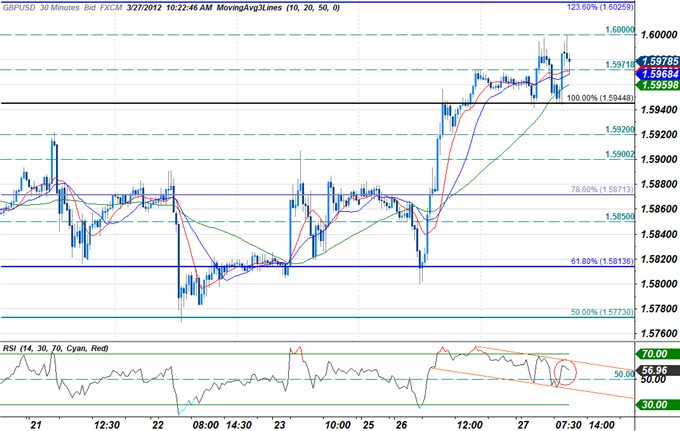 Again we highlight interim resistance at the 1.60-hanel with subsequent topside targets eyed at the 123.6% Fibonacci extension taken from the February 22nd and March 12th troughs at 1.6025, 1.6045 and the 138.2% extension at 1.6075. A likely break below interim support at 1.5970 eyes intra-day targets at the 100% extension at 1.5945. Should this level be compromised, look for pressure to persist with subsequent support targets eyed at 1.5920, the1.59-handle, an the 78.6% extension at 1.5870. Traders will be closely eyeing 4Q GDP data out of the UK tomorrow morning with consensus estimates calling for growth to remain unchanegd at 0.7% y/y. 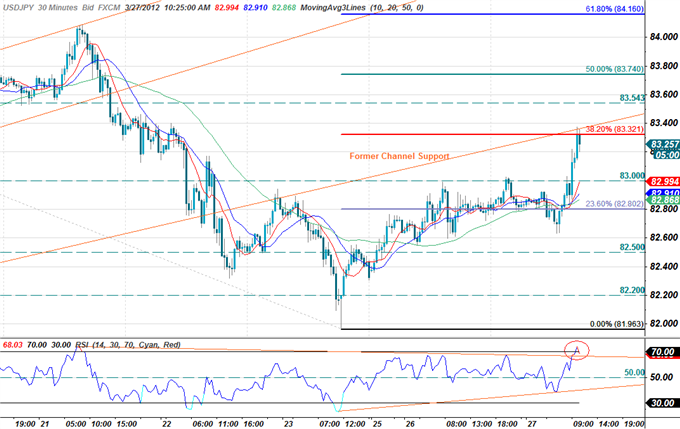 The Japanese yen is the weakest performer against the greenback with a decline of nearly 0.50% on the session. We noted last week that the USDJPY correction is likely to be short-lived with the pair rebounding sharply off the 82-handle before encountering resistance at the 38.2% Fibonacci extension taken from the March 7th and 23rd troughs at 83.32 in early US trade. A breach above the confluence of this Fibonacci level and former channel support offers further conviction on the resumption of long-side scalps with topside targets seen at 83.54, the 50% extension at 83.75, the 84-figure, and the key 61.8% extension at 84.16. Interim support rests at the 83-handle backed closely by the 23.6% extension at 82.80, 82.50, and 82.20. A break below the March 23rd low negates our bullish bias with such a scenario eyeing subsequent floors at 81.50 and the 81-figure.

Join Michael on Tomorrow morning for a Live Scalping Webinar at 1330GMT (9:30ET)