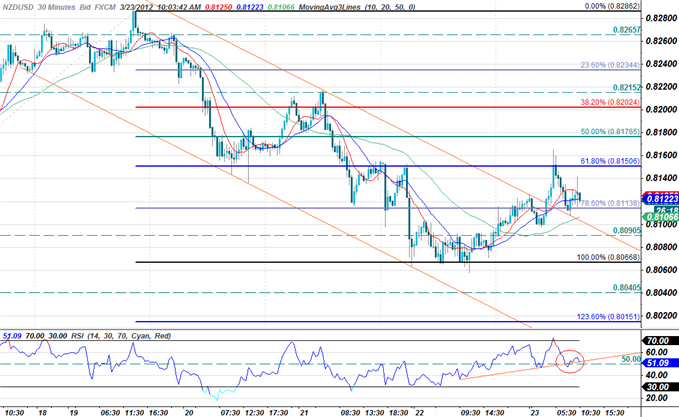 The New Zealand dollar is the top performer against a weaker dollar in early US trade with an advance of 0.38% on the session. The greenback is on the defensive today despite continued losses in equity markets with risk appetite remaining heavy as stocks post their fourth consecutive day of declines. The kiwi broke above channel resistance in overnight trade before encountering resistance at the 61.8% Fibonacci extension taken from the March 8th and 19th crests at 8150. A breach here eyes subsequent topside targets at 8175, the 38.2% extension at the 82-figurr and 82.15. Interim support rests with the 78.6% extension at 8114 backed closely by former channel resistance (now support) and the 200-day moving average at 8093. A break below this level risks substantial losses for the kiwi with subsequent daily support targets seen at just below the 80-figure. 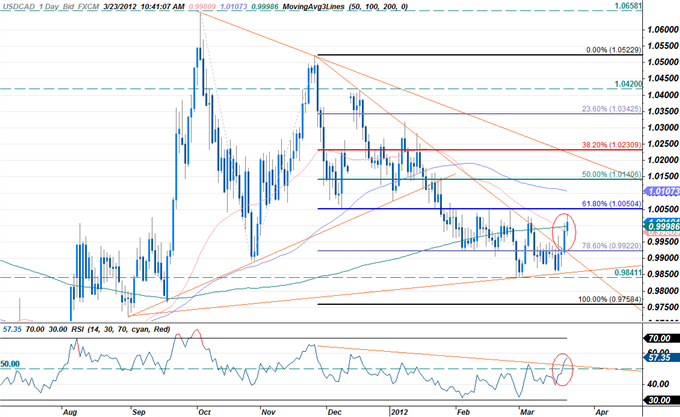 The Canadian dollar is the weakest performer ahead of the European close with a decline of 0.20% against the greenback. Inflation data released this morning missed consensus estimates with the February CPI print coming in at 2.6% y/y, missing calls for a read of 2.7% y/y. Weekly declines in crude prices and overall subdued demand for risk assets have continued to weigh on the loonie with the USDCAD posting a fourth day of consecutive advances, its longest winning streak so far this year. The move also marks the third consecutive week of declines for the loonie with the pair breaching above key trendline resistance dating back to November 25th yesterday. Critical daily resistance stands at the 61.8% Fibonacci extension taken from the October 4th and November 25th crests at 1.0050. 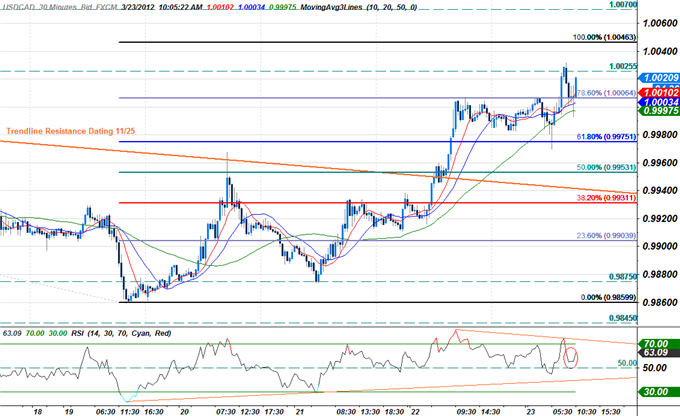 Interim support for the USDCAD rests with the 78.6% Fibonacci extension taken form the March 1st and 19th and troughs at parity backed by the 61.8% extension at 9975 and 9950. Soft topside resistance is seen at 1.0025 with the 100% extension one again highlighting the 1.0050 level. Multiple attempts at a breach above this level over the past several months have been met with substantial pullbacks and as such we reserve this level as our topside limit which if compromised offers further conviction on our directional bias. Such a scenario eyes extended topside targets at 1.0070, the 123.6% extension at 1.0090, and the 100-day moving average at 1.0109. Our medium-term bias on the USDCAD remains weighted to the topside with pullbacks in the exchange rate offering favorable long entries.