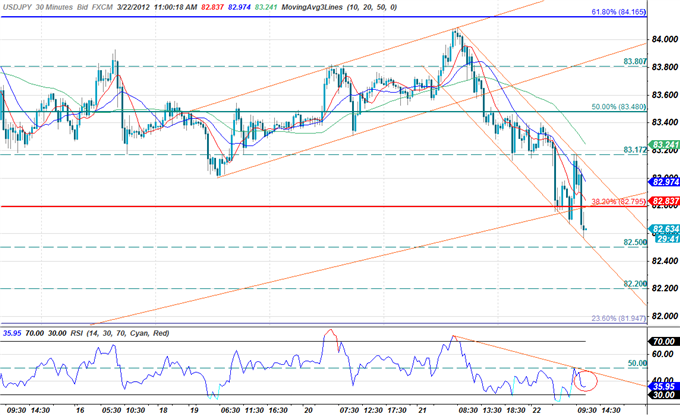 The Japanese yen is the top performer against a stronger dollar in early US trade with an advance of more than 0.90%o on the session. Weaker than expected China manufacturing PMI data out last night has continued to weigh on broader market sentiment as concerns over slowing growth in the world’s second largest economy take root. Adding fuel to the sell-off were weaker than expected reports out of the Eurozone on manufacturing and services PMI as well as industrial new orders which all printed well below expectations. As a result, classic haven flows into lower yielding “haven” assets have dominated early trade with the dollar and the yen acting as chief beneficiaries of risk aversion flows.

The USDJPY has continued to trade within the confines of a short-term descending channel formation dating back to the highs put in yesterday just above the 84-figure. Interim support for the pair now rests at 82.50 backed by 82.20 and the 23.6% Fibonacci extension taken from the February 2nd and March 6th troughs at 81.95. Topside resistance stands with the 38.2% extension at 82.80 with subsequent ceilings seen at 83.17, the 50% extension at 83.50 and 83.80. Note that although our longer-term bias on the USDJPY remains weighted to the topside, the recent correction continue to trend lower in the interim with drawdown offering favorably entries for long positions. 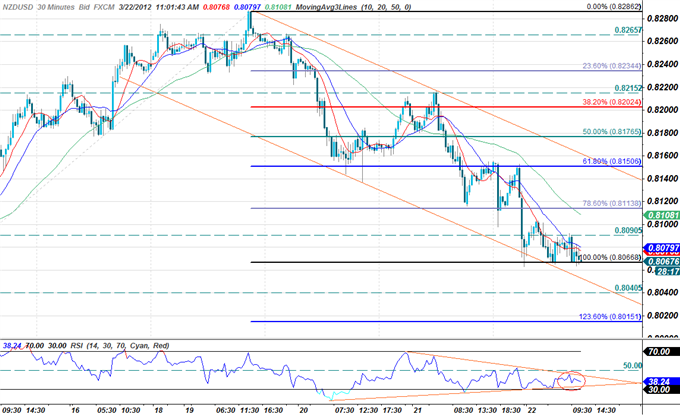 The New Zealand dollar is the weakest performer for a third consecutive day with the kiwi off by more than 1.4% ahead of the European close. Higher yielding, growth linked currencies like the aussie and the kiwi have come under substantial pressure with equity markets remaining on the defensive as risk appetite continues to subside. The NZDUSD continues to trade within the confines of a descending channel formation dating back to March 19th with the exchange rate currently resting on interim support at the 100% Fibonacci extension taken from the March 8th and 19th crests at 8065. A break below this level eyes subsequent support targets at channel support/8040, the 123.6% extension at 8015 and the 138.2% extension at 7983. Interim resistance holds 8090 backed by the 78.6% extension at 8114 and the confluence of channel resistance and the 61.8% extension at 8150. Look for the kiwi to consolidate into the close with a pullback of some magnitude likely on the heels of the drawdown from 8290.Our medium-term bias on the kiwi remains weighted to the downside with a close below 8060 offering further conviction on our directional bias.