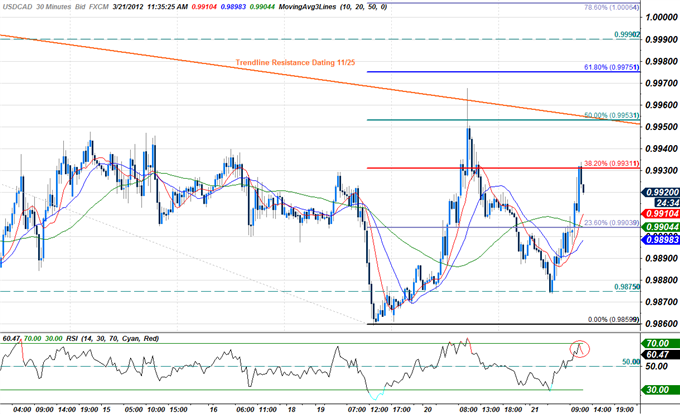 The Canadian dollar is the top performing currency against a stronger greenback at noon in New York with decline of just 0.08% on the session. The dollar has continued to rally after mounting its counteroffensive yesterday with the USDCAD rebounding sharply off soft support at 9875 in early European trade. The pair has continued to hold a tight range over the past few days and may continue to decouple from broader market risk trends in the interim.

Topside resistance stands at the 38.2% extension taken from the March 1st and 19th troughs at 9930 with key resistance seen at the confluence of the 50% extension and trendline resistance dating back to November 25th at 9950. A breach above this level risks further losses for the loonie with such a scenario eyeing subsequent ceilings at the 61.8% extension at 9975 and the 78.6% extension just above parity. Interim support rests with the 23.6% extension at 9900 backed by the overnight low at 9875 and 9860. Critical support rests at the March lows made on the first of the month at 9845. We remain neutral on the pair at these levels noting that a break above trendline resistance dating back to November offers further conviction on our topside directional bias. 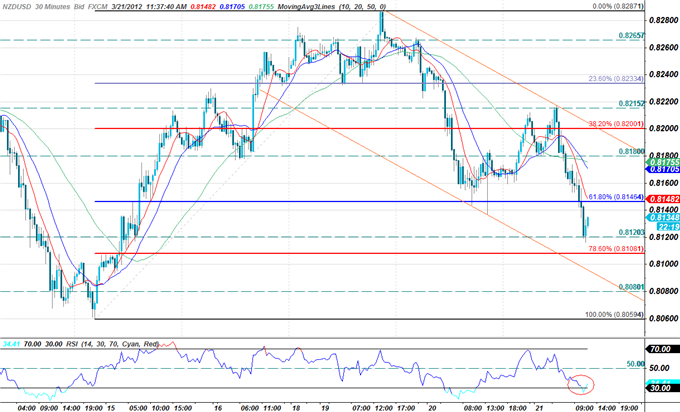 The New Zealand dollar is the weakest performer for a second consecutive day with the kiwi off by more than 0.50% on the session. The NZDUSD has continued to trade within the confines of a descending channel formation with the pair breaking below the 61.8% Fibonacci retracement taken from the March 14th advance at 8145 in early US trade. This level will now act as interim resistance with subsequent ceilings seen at 8180 and the confluence of the 38.2% retracement and channel resistance at the 82-figure. Interim support now rests at 8120 backed closely by the 78.6% retracement at 8108 and the 200-day moving average just above 8080. A break below 8060 risks substantial losses for the kiwi with such a scenario eyeing longer-term targets at the 100-day moving average just shy of the 80-figure.Look for the kiwi to consolidate into the close with a pullback of some magnitude likely on the heels of the drawdown from 8290. Our medium-term bias on the pair remains weighted to the downside.

*Note that the RBNZ GDP printis on tap for 2145GMT with consensus estimates calling for a read of 2.2% y/y, up from a previous print of 1.9% y/y. The data is likely to fuel volatility in the pair and as such traders are recommended to be flat into the print until such time that a clear markets direction can be identified.