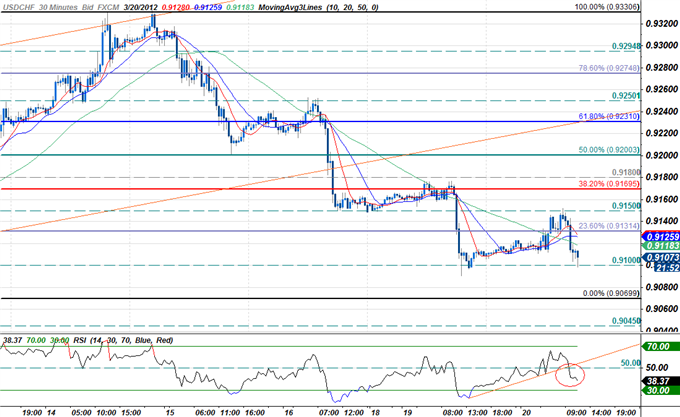 The swissie is the top performing currency against a stronger US dollar with an advance of just 0.07% on the session. The dollar has mounted a substantial counteroffensive after suffering three days of consecutive declines with the greenback outperforming all of its major counterparts save the swissie and the euro. Markets are on the defensive today with global equity markets trading lower across the board, fueling flows into lower yielding assets as a bout of profit taking weighs on broader market sentiment.

The USDCHF has continued to come off since breaking below channel support dating back to the February 29th low with interim support seem holding at the 91-figure. A break here challenges the March 8th lows at 9070 with such a scenario eyeing subsequent floors at 9040 and 9010. Topside resistance holds at 9150 backed by the 38.2% Fibonacci extension taken from the February 29th and March 8th troughs at 9170 and the 50% extension at the 92-handle. The downside here should be limited as appreciation in the franc weighs on the EURCHF exchange rate which continues to respect the 1.20 floor imposed by the SNB. 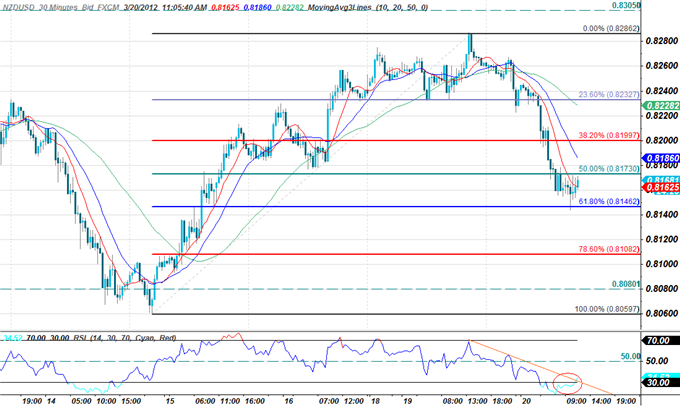 The New Zealand dollar is the weakest performer at noon in New York with a loss of more than 1.1% on the session. As one would expect, the risk off environment has continud to weigh on higher yeilding currencies with the kiwi and the aussie suffering broad based losses investors seek refuge in haven assets. The NZDUSD currently rests on support at the 61.8% Fibonacci retracement taken form the March 13th advance at 8145 with subsequent floors seen at the 78.6% retracement at 8108, 8080, and the 100% retracement at 8060. A break below this levbel risks substantail losses for the kiwi with such a scenarion eyeing longer-term targets at the 100-day moving average just shy of the 80-figure. Topside resistance stands at the 50% retracement at 8173 backed by the 82-figure and the 23.6% retracemen at 8230. Look for the kiwi to consolidate into the close with a continued risk sell-off tomorrow likely to keep pressure on the high yielders.