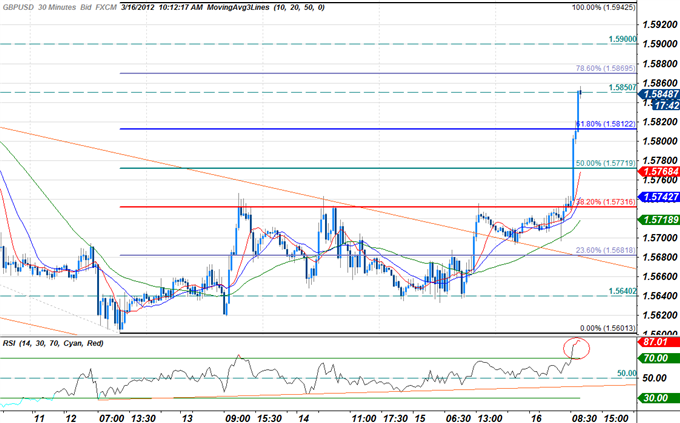 The British pound is the strongest performer against a substantially weaker greenback in early US trade with an advance of more than 0.90% on the session marking its largest single day rally since December 20th. The GBPUSD broke above channel resistance dating back to the March 1st high yesterday with CPI data out of the US this morning fueling a dollar sell-off that saw the pair break above the 38.2% Fibonacci extension taken form the February 22nd and March 1st troughs at 1.5730 before encountering resistance at the 200-day moving average at 1.5860. This level remains paramount for the pound with a breach above risking substantial losses for the greenback. 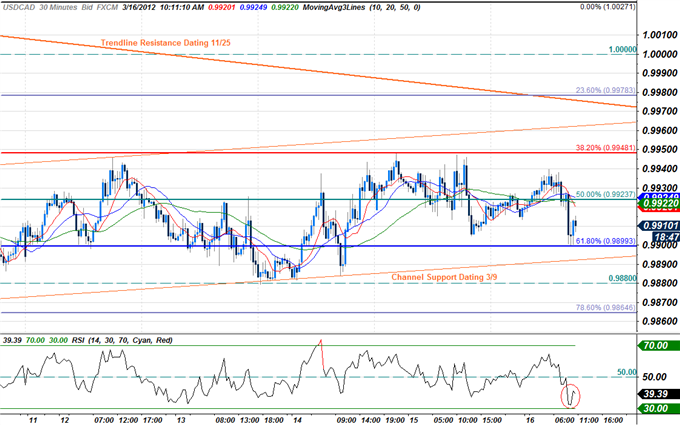 The Canadian dollar is the weakest performer for the second consecutive day with a the looni advancing a mere 0.06% despite broad-based dollar losses. The USDCAD has continue to trade sideways with our near-term outlook remaining neutral until the pair breaks out of its recent rrange bterrn 9880 and 9950. Interim resistance stands at the 50% Fibonacci extension taken from the February 27th and March 6th crests at 9925 backed by the 38.2% extension at 9950 and trendline resistance dating back to November 25th, currently around 9970. Initial support is seen at the 61.8% extension at the 99-figure with subsequent floors eye at 9880, the 78.6% extension at 9865, and 9845.

Today’s weak loonie performance has put our EURCAD scalp in play with topside targets now in veiw as euro gains cotninue to outpace those of the Canadian dollar. For compelte EURCAD scalp targets refer to this week’s Scalp Report.