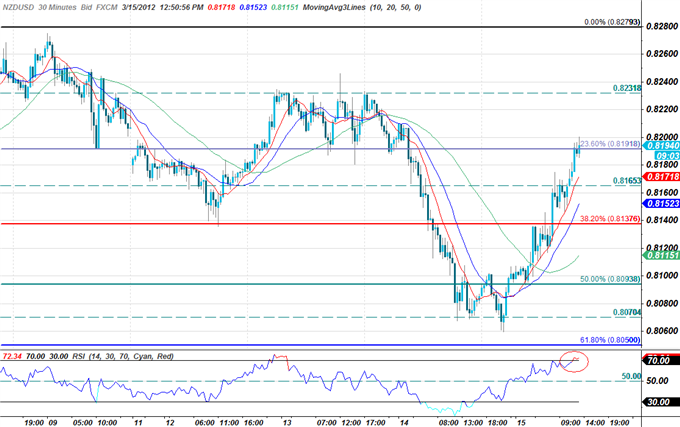 The New Zealand dollar is the top performer against a weaker greenback in North American trade with an advance of more than 1.30 % on the session. The dollar is weaker against all its major counterparts after four days of consecutive advances. The kiwi’s advance comes on the heels of the largest decline in the pair this year, with the rebound suggesting we may continue to trend higher in the days to come. Today’s advance also marks the largest since January 3rd when the kiwi surged 1.51%.

Currently the kiwi is holding just below interim resistance at the 23.6% Fibonacci extension taken from the February 29th and March 8th crests at 8190 with subsequent topside targets eyed at 8230 and the March 8th highs at 8280. A break here negates this particular extension with such scenario eyeing extended targets at the 83-handle and 8340. Interim support rests at 8165 backed by the 38.2% extension at 8140 and the 8194. Look for the pair to retrace a portion of today’s advance as RSI breaks back below overbought territory with a pullback offering favorable entries for short-term longs. 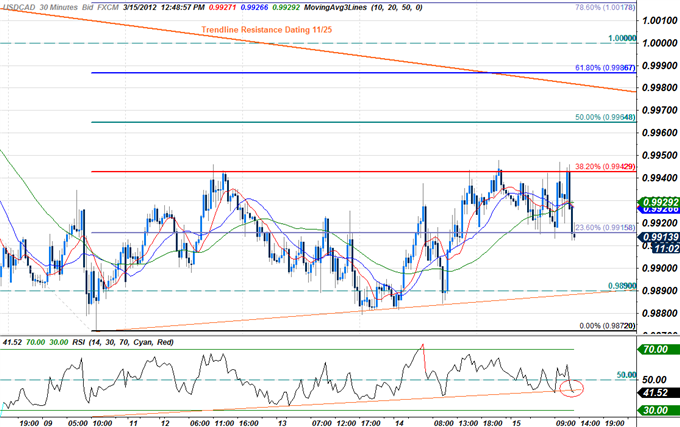 The Canadian dollar is the weakest perfromer with an advance of just 0.13% despite broad-based losses in the greenback. US economic data continues to best expectations, look for the loonie to remain well supported as improving US data and higher crude prices bode well for the Canadian economy. An RSI break below trendline support coupled with a move below the 23.6% Fibonacci extension taken form the March 1st and 9th troughs at 9915 eyes interim support at 9890 backed by 9870. A break at thie levels looks to challenge the 2012 lows at 9845. Topside resistance stands with the 38.2% extension at 9943 with subsequent ceilings eyed at 9965 and trendline resistance dating back to the November 25th highs around 9980.

Today’s weak loonie performance has put our EURCAD scalp in play with topside targets now in veiw as euro gains cotninue to outpace those of the Canadian dollar. For compelte EURCAD scalp targets refer to this week’s Scalp Report.