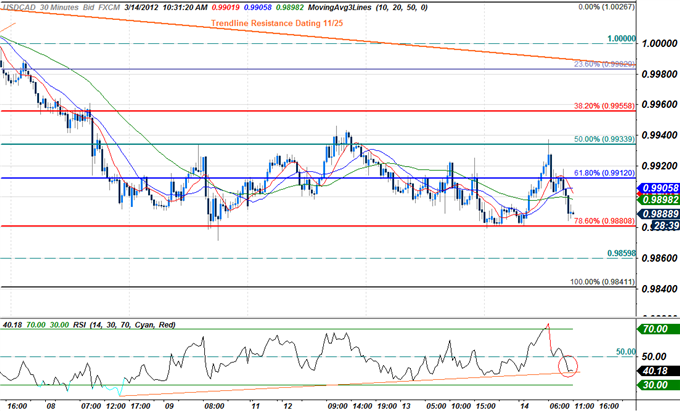 The Canadian dollar is the top performer against a stronger greenback in early US trade with a decline of just 0.04% on the session as of 10:45ET. Despite a broad based dollar rally, the loonie has remained rather resilient with the pair continuing to hold above the 78.6% Fibonacci retracement taken from the March 1st advance at 9880. We remain neutral on the pair at these levels noting interim resistance at the 61.8% retracement at 9912 backed by 9930 and the 38.2% retracement at 9955. A break below interim support eyes subsequent floors at 9860 and the 100% retracement at 9840. The dollar risks substantial losses if this level is compromise with longer-term daily support seen at the 98-handle and the 9755. 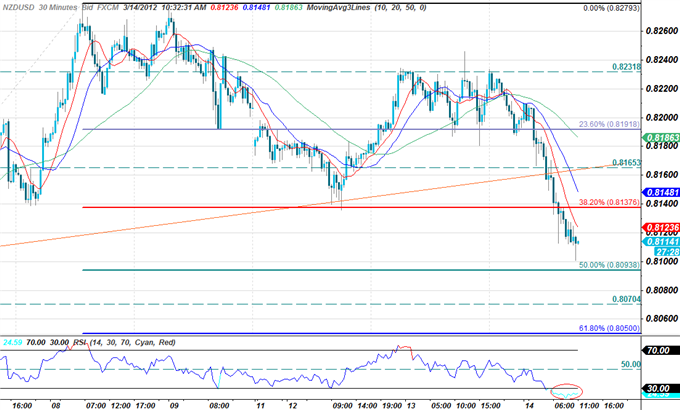 The New Zealand dollar is the weakest perfermer with a loss of more than 1.40% on the session despite improving broader risk sentiment. Advances in the US dollar continue to weigh on the commodity bloc as calls for quantitative easing have seemingly been silenced heels of yesterday’s FOMC rate decision where the Fed acknowlegde the recent strength in domestic data while leaving out any mentions of further easing measrues. As such the greenback has mounted a massive counter-offensive with the reserve currency outperfroming all of its major coutnerparts in early trade.

Interim support for the NZD/USD rests just abvoe the 50% Fibonacci extension taken form the February 29th and March 8th crests at the 81-figure. A break below this level exposes subsequent support targets at 8070, the 61.8% extension at 8050 and 8030. Interim resistance now stands at the 38.2% extension at 8140 backed by 8165 and the 23.6% extension at 8190. Look for kiwi losses to taper off later in the session with a pullback offering favorable entries to short positions.