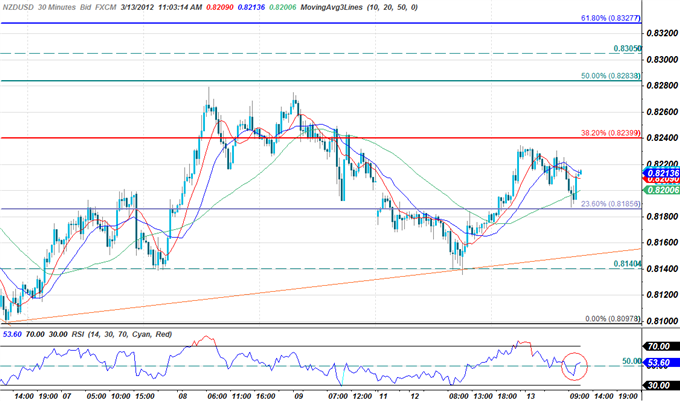 The New Zealand dollar is the top performer against the greenback in early US trade with an advance of more than 0.43% on the session. Broader risk appetite trends have continued to support the kiwi with global equity markets surging as concerns over the European debt crisis subsided and stronger than expected US retail sales data suggested that the US recovery is on proper footing. Data has continued to surprise to the upside with Friday’s non-farm payroll figures topping estimates for the second consecutive month as the Dow hit a 4-year high in early trade.

As such, the high yielding kiwi has remained well supported with the NZD/USD breaking above the 23.6% Fibonacci retracement taken from the February 29th decline at 8185 before rebounding off that same level early in the session. This gives further conviction for further kiwi advances throughout the session with topside resistance targets eyed at the 38.2% retracement at 8240, 8280, and 8305. A break below the session opening range low at 8185 negates our short-term bias with such a scenario eying subsequent floors at 8140, the March lows at the 81-figure, and 8060. 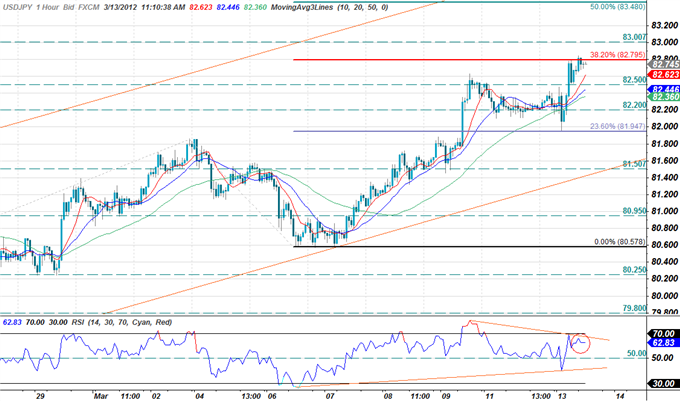 The yen is the weakest perfromer against a mixed US dollar with the USD/JPY advancing more than 0.60 on the session. The pair has continued to trade within the confines of an ascending channel formation dating back to the February lows with the dollar testing interim resistance at the 38.2% Fibonacci extension taken from the February 2nd and March 6th troughs at 8280. Our medium-to-long term bias remains heavily weighted to the topside on the this pair with a breach eying topside targets at the 83-figure, the 50% extension at 8350, and the confluence of channel resistance and the 61.8% extension at 84.15. Soft interim support rests at 82.50 bakced by 82.20, and the 23.6% extension at 81.95.