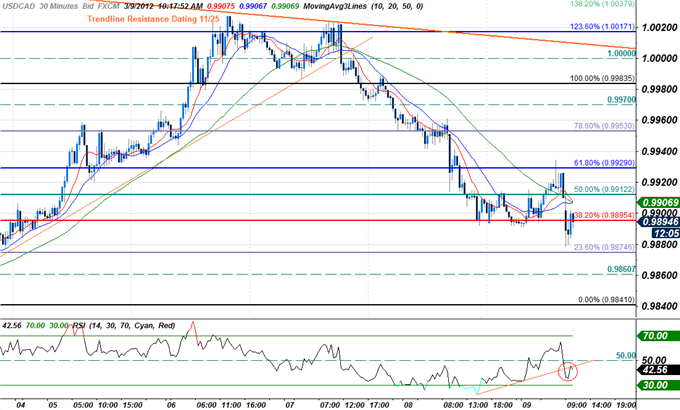 The Canadian dollar is the top performer against a substantially stronger greenback in early US trade with an advance of 0.07% on the session. Weaker than expected data out of Canada saw a brief run-up in the pair after employment data showed the loss of 2.8K jobs in February, missing calls for the addition of 15K. A reduction in the participation rate did however put weight on the unemployment rate which fell from 7.6% to 7.4% last month. Today’s much anticipated non-farm payrolls report again topped estimates with a print of 227K jobs, besting calls for a print of just 210K. The data sparked a rally in the dollar which surged against all its major counter-parts save the loonie which remained well supported. As Canada’s largest trading partner, improved US data bodes well for the Canadian economy and as such the loonie may continue to advance on the back of today’s print. 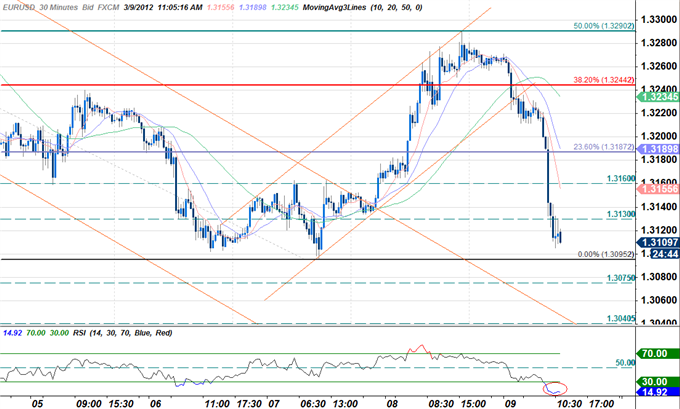 The euro is the weakest performer against the greenback with a loss of more than 1.08% on the session after moving nearly 139% of its daily average true range. The results of the Greek PSI agreement hit the wires today with 95.7% paticiation from private debt holders. Investors now look ahead to Monday when the ISDA (Intereation Swaps and Derivatives Association) will rule on whether or not the CDs on Greek debt will be triggered. The euro started its descent early in pre-market trade with the NFP print prompting a strong dollar rally that saw the pair plummet as traders rushed into the reserve currency. As we have noted several times this year, the dynamic of the positive US data weighing on the dollar has continued to subside as improving US data puts added pressure on the Fed to start normalizing monetary policy.

The single currency remains under pressure with the EURUSD pair eyeing intrerim support targets at the March 7th low just shy of the 1.31-figure. Subsequent downside targets are seen at 1.3075, 1.3040, and 1.3010. Interim topside resistance is eyed at 1.3130 backed by 1.3160, the 23.6% Fibonacci retracement taken form the February 24th descent at 1.3185 and the 38.2% retracement at 1.3245. Our outlook on the euro remains weighted to the downside with a break below the 1.30-handle offering further conviction on our directional bias.