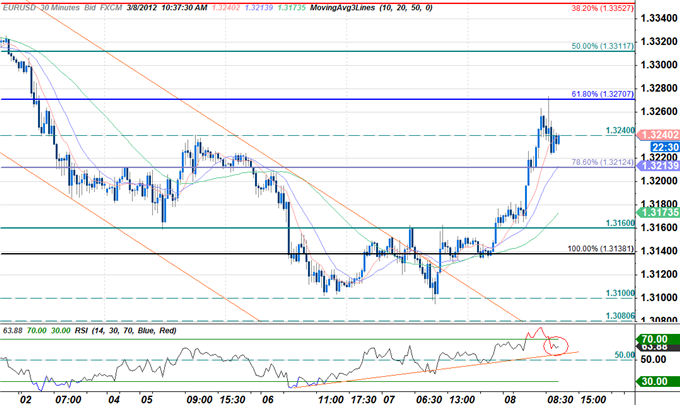 The euro is the strongest performer against a substantially weaker dollar in early US trade with an advance of more than 0.68% on the session. As expected, the ECB held interest rates at 1.00% today citing continued downside risks to the economy. Central bank president Mario Draghi struck a balanced tone despite cutting the region’s growth forecast for 2012 and defended the ECB’s LTRO tenders that pumped over a trillion euros into the banking system. Still, markets have remained well supported on hopes that the Greek PSI talks will be resolved with at least 75% participation needed to invoke the Collective Action Clause (CAC) which would avert a default.

The euro broke back above key resistance 1.3160 in overnight trade before encountering resistance at the 61.8% Fibonacci extension taken from the February 9th and 24th crests at 1.3270. A break above this level eyes subsequent resistance targets at the 50% extension at 1.3310 and the 38.2% extension at 1.3350. Soft support rests at 1.3240 backed by the 78.6% extension at 1.3213 and 1.3160. Should this level be compromised, look to target subsequent floors at the 1.31-figure and 1.3080. The medium-term euro outlook remains weighted to the downside noting that a relief rally could continue to support the single currency in the interim if Greece is able to avert a disorderly default. 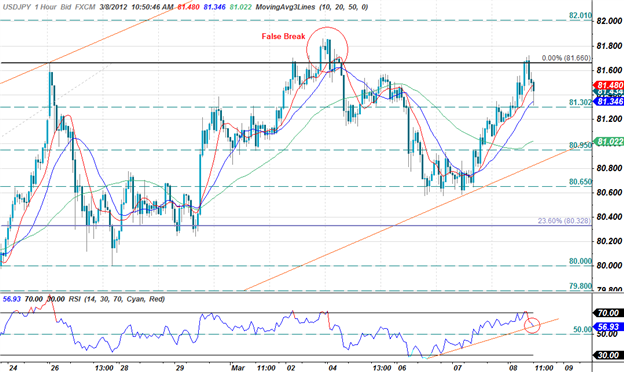 The Japanese yen is the only currency amoung the majors to come under pressure against the greenback with the USDJPY advancing 0.36% on the session. As risk appetite returns to markets, the yen will likely remain under pressure with our bias on the pair weighted to the topside. The USDJPY tested key resistance at 81.70 today before quickly pulling back to the 81.30 soft support level. We continue to favor long positioning here with a topside breach eyeing targets at the 82-figure and 82.50. Subsequent support levels below 81.30 are seen at 80.95, 80.65, and the 23.6% Fibonacci retracement taken from the February advance at 80.33.

Join Michael Tomorrow morning for a Live Coverage of the NFP Print at 1330GMT (8:30ET)