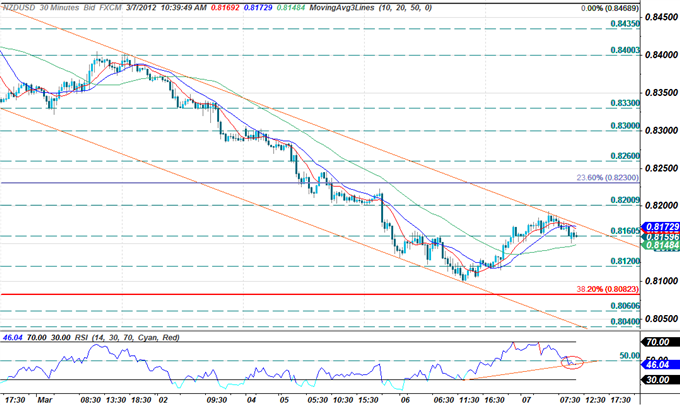 The New Zealand dollar is the top performer against the greenback in early US trade with an advance of 0.46% on the session. Risk aversion flows have eased after yesterday’s massive risk sell-off with equity markets posting modest advances ahead of key event risk tomorrow and Friday. Interest rate decisions tomorrow from the BoE, ECB, and the BoC and Friday’s much anticipated non-farm payroll figures will drive price action for the remainder of the week with traders lending a keen ear to the accompanying remarks as all three central banks are expected to leave rates unchanged.

The NZDUSD continues to trade within the confines of a descending channel formation with the exchange rate holding just below channel resistance at 11am in New York. Should the rally in risk gather pace, look for a topside break of this formation with resistance targets eyed at the 8200-handle, the 23.6% Fibonacci retracement taken form the December 15th advance at 8230 and 8260. Interim support holds at 8160 backed by 8120 and the 38.2% retracement at 8083. A break below this level risks substantial losses for the kiwi with such a scenario eyeing a tag of channel support currently around the 8040 level. Our medium-term bias remains weighted to the downside noting that the pair could move higher in intra-day trade as markets consolidate after posting the steepest one day loss seen this year. 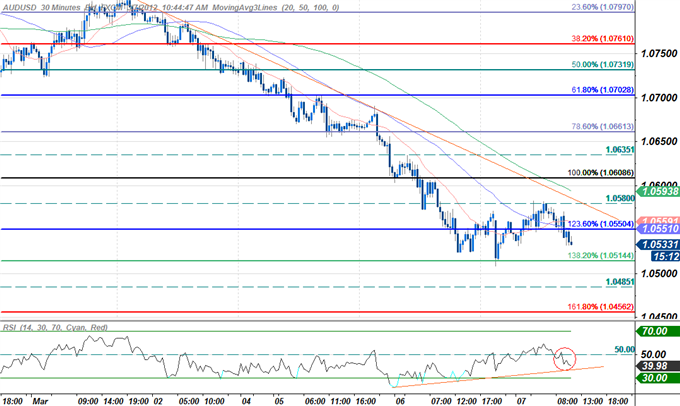 The Australian dollar is the weakest performer ahead of the European close with a decline of 0.12% on the session despite a slight rebound in broader risk appetite. 4Q GDP figures out of Australia weighed on the aussie in overnight trade after the data missed expectaions with a print of just 0.4% q/q. Consensus esitmates called for a print of 0.8% q/q, with the year on year figures also missing expectaions with a print of 2.3% versus calls for a read of 2.4% y/y. With Australia’s largest trade partner China also cutting its growth forecast from 8% to 7.5% just a day earlier, the AUDUSD has come under substantail pressure with the pair off off by more than 1.3% this week alone.

The pair continues to hold below trenline resistance dating back to the March 1st highs with interim topside resistance seen at 1.0580. Look for the a possible topside break of this level in US trade as risk appetite slowly creeps back with such a scenario eyeing subsequent topside targets at the 100% Fibonacci extension taken from the February 8th and 29th crests at 1.0609, 1.0635, and the 78.6% extension at 1.0660. Interim support rests with the 123.6% extension at 1.0550 backed by the 138.2% extension at 1.0515 and 1.0485. Again our medium-term bias here remains weighted to the downside with rallies in the pair offering favorable short entries positioning.