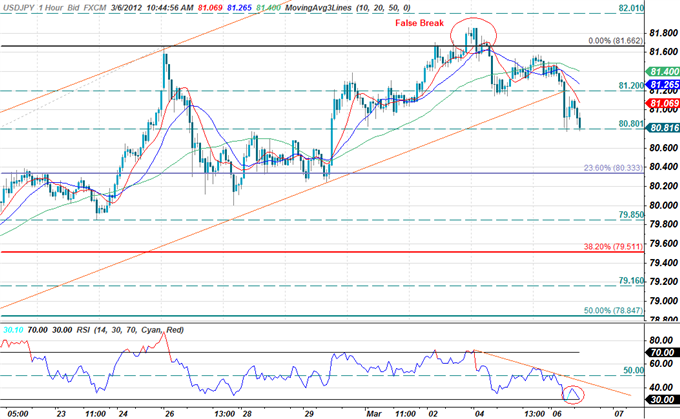 The Japanese yen is the top performing currency for the second day running against a stronger dollar with an advance of 0.84% on the session after moving 121% of its daily average true range. The yen’s advance has continued to gather pace as a bout of risk aversion saw classic haven flows support the dollar and the yen, with higher yielding, growth-linked assets on the defensive. Equity markets are sharply lower at the open with the major stock indices off by more than 1.4% at 11am in New York.

The USDJPY broke below channel support dating back to February 13th in overnight trade with the pair encountering soft support at 80.80 in early North American trade. A break of this level eyes subsequent support targets at the 23.6% Fibonacci retracement taken from the February advance at 80.33, 79.85, and the 38.2% retracement at 79.50. Topside resistance stands at 81.20 backed by 81.66 and the 82-figure. Look for the pair to remain under pressure so long as broader market sentiment continues to favor risk-aversion with our medium-to-long term bias remaining weighted to the topside. For a complete scalp targets on the USDJPY pair refer to last week’s Scalping the Waves report. 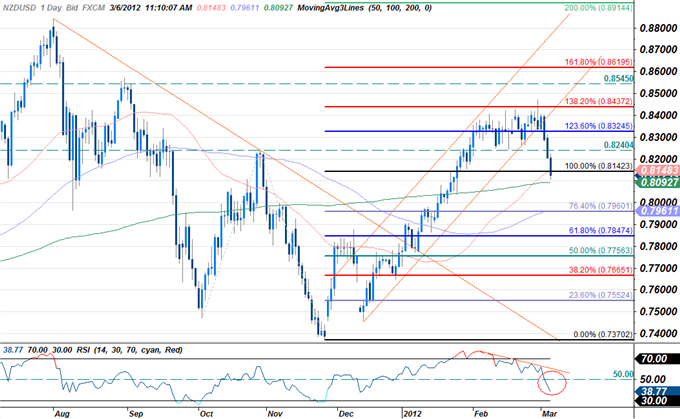 The New Zealand dollar is the weakest performer for the second consecutive day with a delcine of more than 1.05% on the session. Both the aussie and the kiwi have remained under pressure as ongoing concerns over a slowdown in China and the Greek situation in Europe continued to weigh on demand for the high yeilders with last night’s RBA interest rate decision sparking a sell-off in the high yielders. Although the central bank left inrerest rates on hold at 4.25%, policy makers left the door open for further easing noting that inflation expectations leave scope for further cuts to the benchmark interest rate. The daily chart shows the kiwi breaking below key support at the convergence of channel suppor and the 123.6% Fibonacci extension taken from the October 4th and November 25th troughs at 8324 before beginning its descent. Key daily support now rests with the 200-day moving average at 8092. 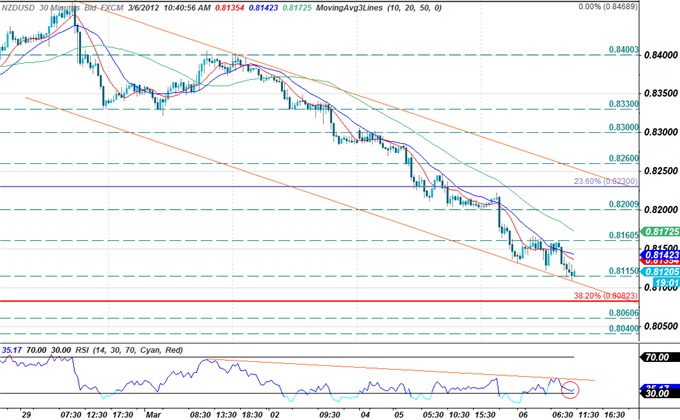 The NZDUSD continues to trade within the confines of a descending channel formation dating back to the 2012 highs put in last week, with the pair now testing channel support at the 8115 soft support target. A break below this level eyes subsequent targets at the 38.2% retracement at 8082, 8060, and 8040. Resistance is eyed at 8160 backled by the 82-figure and the 23.6% retracement at 8230. Our outlook for the kiwi remains heavily weighted to the downside with only a move above 8230 negating our short-term bias.