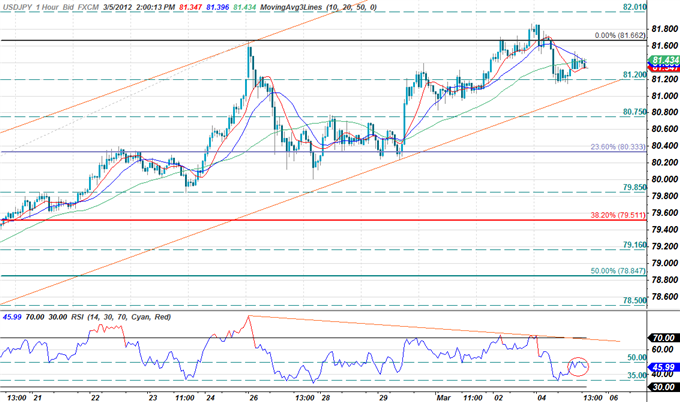 The Japanese yen is the top performing currency against a mixed dollar with an advance of 0.56% on the session. Markets have started the week on the defensive with global equity markets in the red after China reduced its 2012 growth forecast to 7.5% from 8.0%, marking lowest forecast for Chinese growth since 2004. Concerns regarding a hard landing in the world’s second largest economy weighed on broader market sentiment with risk assets under pressure in early trade.

The USDJPY continues to trade above trendline support dating back to February 13th with the pair unable to hold above the 2012 highs put in on Friday at 81.86. Interim support now rests at 81.20 backed by trendline support, 80.75 and the 23.6% Fibonacci retracement taken from the February advance at 80.33. Topside resistance holds at 81.66 backed by the 82-figure, and 82.50. Our medium-to-long-term outlook on the pair remains weighted to the topside with a broader look at a daily chart suggesting that pair may have already put in a significant multi-year low below the 76-handle. For a complete outlook on the current yen setup refer to last week’s Scalping the Waves report. 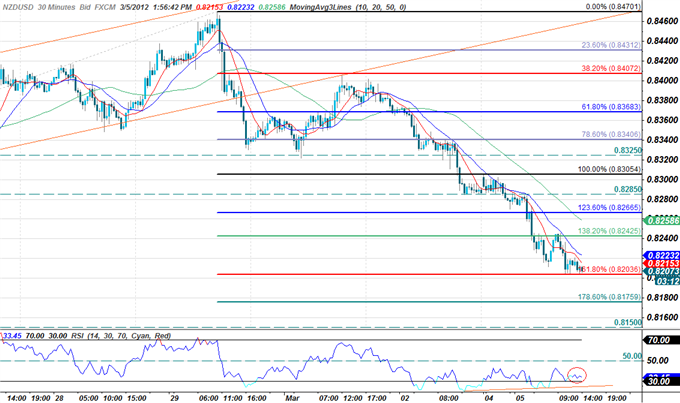 The New Zealand dollar is the weakest performer in afternoon trade in New York with a decline of nearly 1% on the session. The kiwi has come under substantial pressure as classic haven flows saw the high yeilders come under pressure across the board as investors flocked into the safety of the greenback. The NZDUSD has been under pressure ever since breaking below channel support dating back to February 22nd with the pair encountering support at the 161.8% Fibonacci extension taken from the February 19th and 29th crests at 8204. Look for the pair to remain in consolidation heading into the close of trade with the a break below this level eyeing subsequent support targets at the 178.6% extension at 8175, 8150, and 8115. Topside resistance stands at the 138.2% extension at 8243 backed by the 123.6% extension at 8266, 8285, and the 100% extension at 8305. A break above this level negates our short-term bias with such a scenario eyeing subsequent topside targets.