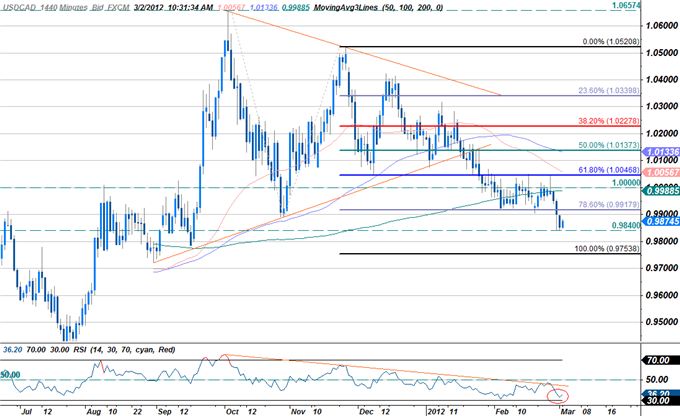 The Canadian dollar is the top prefromer against a stronger greenback in early US trade with a decline of just 0.16% on the session. Risk appetite is on the defensive at the close of the week with the dollar advancing against all its major counterparts as equities drift in and our of positive terrirtory. The USDCAD remains under pressure however since breaking below key Fibonacci support at the 78.6% extension taken from the October 4th and November 25th crests at 9918. This level remains paramount for further loonie advances with daily support resting at 9840. 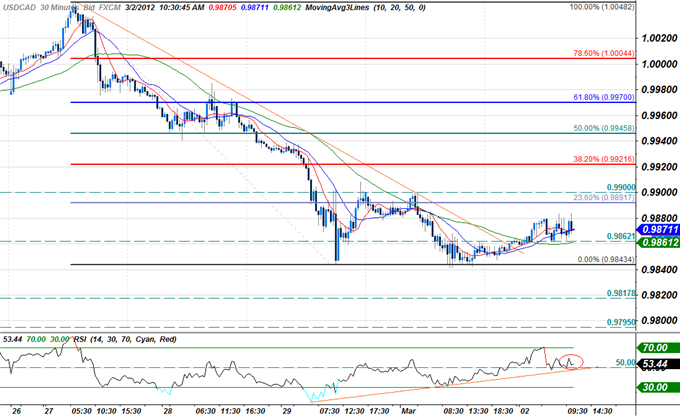 A Fibonacci retracement taken from the February 27th decline eyes interim resistance at the 23.6% retracement at 9890 with a breach above the 99-handle eying subsequent ceilings at the 38.2% retracement at 9920, 9945 and the 61.8% retracement at 9970. A break below soft support at 9963 eyes targets at the 2012 lows at 9843 backed by 9820 and 9795. Our medium-term bias on the pare remains weighted to the downside as surging crude prices and improving Canadian data continues to limit loonie losses despite broad-based dollar advances. 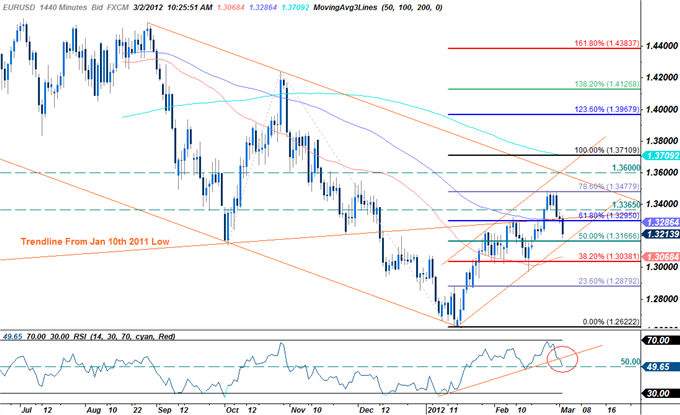 The euro is the worst performing currency an hour into North American trade with a loss of 0.74% on the session. The single currency broke below critical support at the confluence of former trendline support dating back to January 10th 2011, the 100-day moving average, and the 61.8% Fibonacci extension taken from the October 4th and January 13th troughs at the 1.33-figure. The euro now eyes key support at the convergence of the 50% extension and channel support dating back to the 2012 lows at 1.3165. Topside resistance now stands with the figure. 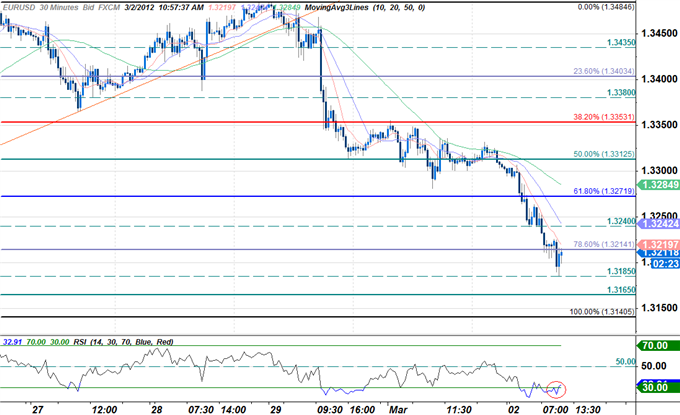 Soft support for the euro rests at 1.3185 backed by 1.3165, the 100% Fibonacci extension taken form the February 9th and 24th crests at 1.3140, and the 1.31-figure. Topside resistance stands with the 78.6% extension at 1.3215 backed by 1.3240 and the key 61.8% extension at 1.3270. We remain bearish on the single currency in the medium-term with a close below 1.3165 offering further conviction on more aggressive shorts agains the single currency. Only a break back above the 1.33-handle would negate our bias with such a scenario eyeing subsequent resistance targets.