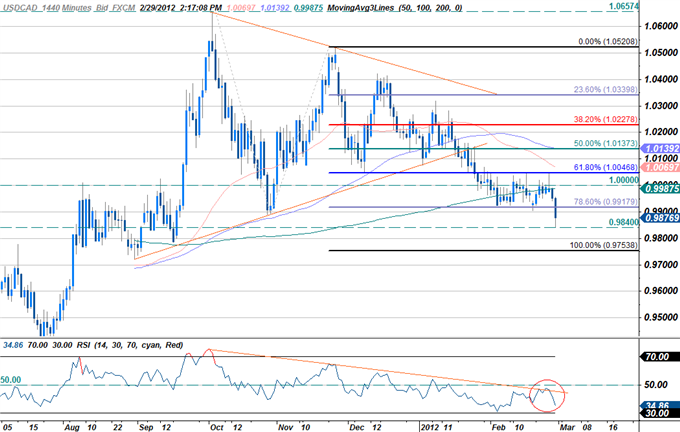 The Canadian dollar is the strongest performing currency against a mixed dollar with the USDCAD pair off by 0.73% on the session. Volatility surged today in early US trade after the ECB completed its second and final LTRO (long term refinancing operation) and Fed Chairman Ben Bernanke testified before the House Financial Services Committee with the dollar advancing against most of its major counterparts as risk appetite quickly diminished. However markets bounced back at the close of European trade with equity markets paring the majority of the losses as the dollar went back on the defensive.

The USDCAD broke below key daily support at the 78.6% Fibonacci extension taken from the October 4th and November 25th crests at 9920 before rebounding just ahead of our soft support target at 9840. Note that the daily relative strength index has also simultaneously rebounded off RSI resistance with the slope suggesting further losses for the pair moving forward. 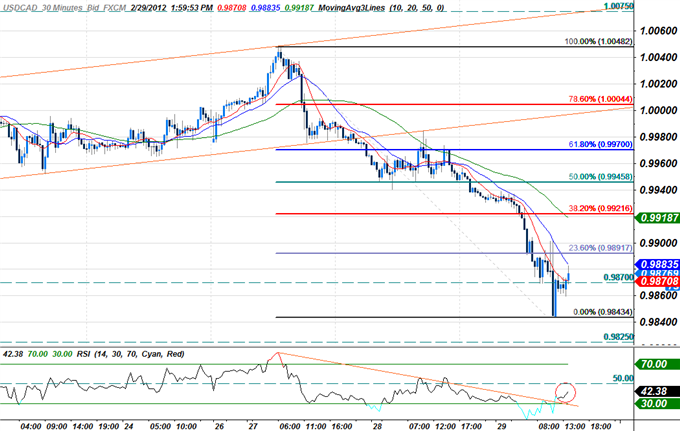 The pair recently broke below channel support dating back to the February 20th low with support for the loonie seen at session lows at 9840 with subsequent floors eyed at 9825 and the 98-handle. Topside resistance now stands at the 23.6% Fibonacci retracement taken form the February 27th crests at 9890 backed by the 38.2% retracement at 9920 and 9945. Our medium-term outlook remains bearish on the USDCAD after today’s massive break down below key support noting the possibility for a pullback of some magnitude before heading lower. 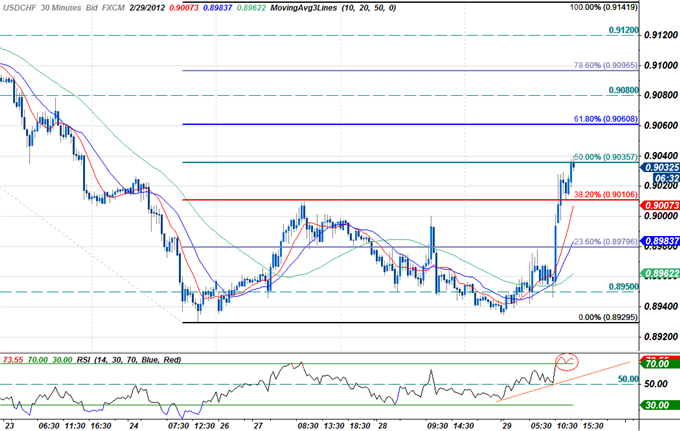 The Swiss franc is the weakest performer an hour ahead of the close with a decline of 0.88% against the greenback. As the euro comes under pressure, look for the swissie to remain under pressure as well with the euro-Swiss peg continuing to alter USDCHF price movements. The pair broke above the 23.6% Fibonacci extension taken from the February 9th and 24th troughs at 8980 before encountering support at the 50% extension at 9035. We remain neutral at these levels noting that the franc may continue to come-off with the euro with topside resistance targets held at the 61.8% extension at 9060, 9080 and the 78.6% extension just shy of the 91-handle. Interim support rests with the 38.2% extension at 9010 backed by 8980, 9850, and the 2012 low at 8930.