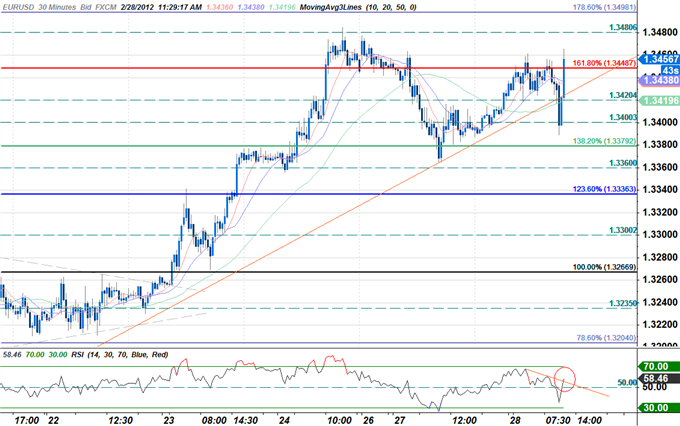 The euro is the top performer against a weaker greenback in early US trade with an advance of 0.45% on the session. Risk appetite briefly dipped after a dismal print on January durable goods orders which grossly missed expectations for a flat print with a headline read of -4.0%. Consumer confidence data later in the session crushed estimates with a print 70.80, marking its highest level since February of last year. Investors shrugged off reports that Ireland was going to put the EU fiscal compact signed last December up for referendum with overall risk appetites taking a leg higher soon after the confidence print. All eyes now turn to tomorrow’s final LTRO tender with traders closely watching the amount European banks will look to lend from the ECB.

The single currency briefly broke below trendline support dating back to the February 16th low before mounting a counteroffensive that saw the euro breach the 161.8% Fibonacci extension taken from the February 6th and 16th troughs at 1.3450. Interim resistance targets are now held at 1.3480, the 178.6% extension at the 1.35-figure, and 1.3520 with longer-term targets held at the 200% extension at 1.3560. Support continues to rest with the ascending trendline with a break below negating our short-term bias. Such a scenario eyes subsequent floors at the 1.34-figure, the 138.2% extension at 1.3380, and 1.3360. Look for the single currency to remain well supported with a break above key resistance at 1.3480 eyeing subsequent topside targets. 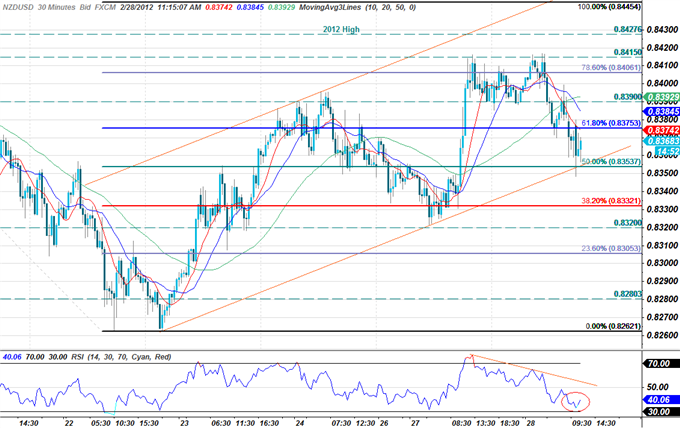 The New Zealand dollar is the weakest performer at noon in New York with the kiwi off by 0.40% on the session. The pair has continued to trade within the confines of an ascending channel formation dating back to the February 22nd low with the pair rebounding off the convergence of channel support and the 50% Fibonacci extension taken from the February 16th and 22nd troughs at 8354. Interim resistance now stands at the 61.8% extension at 8375 backed by the 78.6% extension at 8406 and the 2012 high at 8028. A break below channel support negates our short-term bullish bias with such a scenario eyeing subsequent support targets at the 38.2% extension at 8332, the 23.6% extension at 8305, and 8280.