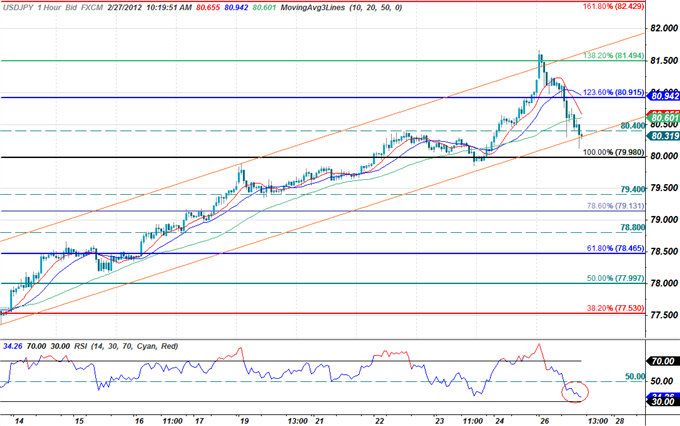 The Japanese yen is the highest performing currency against a stronger greenback in early US trade with the USD/JPY off by more than 1.1% on the session. Equity markets are in the red early in the week as investors continue to eye developments out of Europe with the ECB’s LTRO taking center stage this week. The central bank will offer its final 3year tender at fixed low rates to European banks looking to recapitalize amid ongoing concerns of a “mild recession” in the 17 nation bloc. The yen which has suffered massive losses since the February 2nd low went back on the offensive today pressuring the pair lower. While the pair is likely to remain under pressure in intra-day trade, we continue to favor the long side with pullbacks offering ideal entries off our support targets.

The USD/JPY has continued to trade within the confines of an ascending channel formation dating back to February 3rd with a break of channel support eyeing subsequent floors at the 100% Fibonacci extension taken from the October 30th and February 1st troughs at the 80-figure, 79.40, and the 78.6% extension at 79.13. Topside resistance stands with the 123.6% extension at 80.90 backed by the 138.2% extension at 81.50 and channel resistance. Look for the pair to continue its ascent later in the week with our medium-term outlook on the pair weighted to the topside. 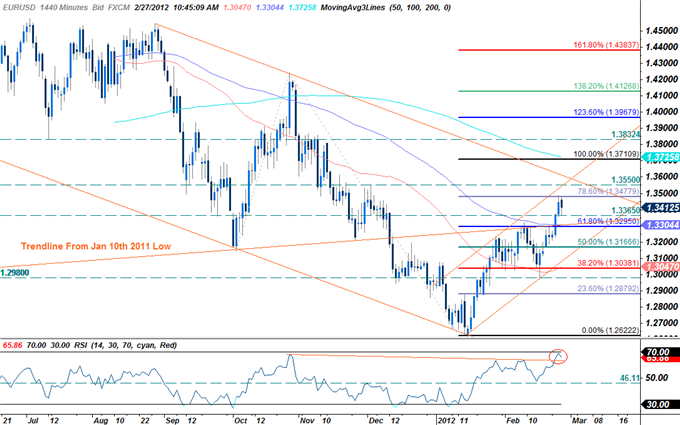 The euro is the weakest performer at 10am in New York with the euro off by more than 0.40% on the session. From a daily standpoint the euro continues to hold within the confines of an ascending Elliot channel formation with a key daily close above the 78.6% Fibonacci extension taken from the October 4th and February 13th troughs at 1.3480 needed to dispel further short-term losses for the single currency. Crucial support holds at the confluence of the 61.8% extension, the 100-day moving average, and former trendline support dating back to the January 10th 2011 lows at the 1.33-figure. 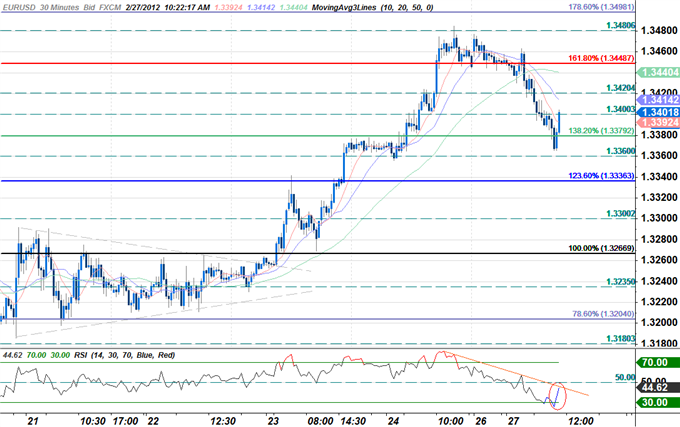 The euro scalp chart highlights topside resistance targets at 1.3420, the 161.8% Fibonacci extension taken from the February 6th and 16th troughs at 1.3450 and the 2012 highs put in on Friday around 1.3480. The pair briefly broke below the 138.2% extension at 1.3380 before pullback back towards the 1.364-figure in early US trade. A break below this level eyes soft support at 1.3360 backed by the 123.6% extension at 1.3335 and the 1.33-figure. Our medium-term outlook for the euro remains weighted to the topside with pullbacks offering favorable long entries with a test of daily trendline resistance dating back to August 29th at 1.3550 likely in days to come.