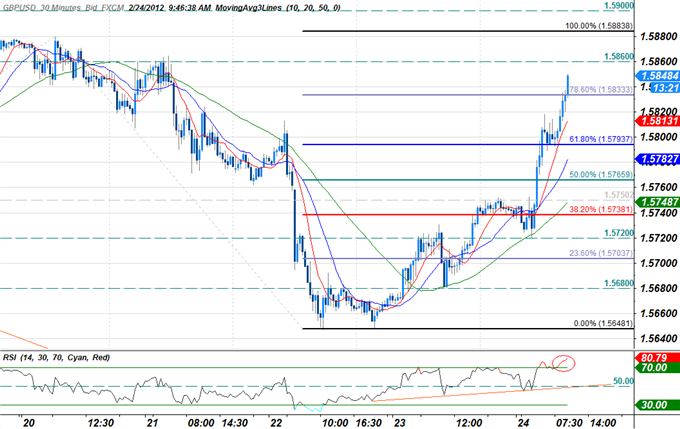 The British pound is the top performing currency against a weaker dollar in early US trade with an advance of more than 0.72% on the session. Economic data out of the UK helped support the sterling’s advance with the 4Q exports, imports, and private sector consumption all topping consensus estimates. The pound has now broken above key resistance at 1.5760 with topside resistance targets eyed at 1.5860, the 100% Fibonacci extension taken from the February 14th and 22nd troughs at 1.5880, and the 1.59-handle. Interim support rests at the 78.6% extension at 1.5833, the 61.8% extension at 1.5795, and 1.5765. Our medium-term bias for the pound remains weighted to the topside here noting pullbacks into our support targets are likely to offer ideal entry for long positioning. 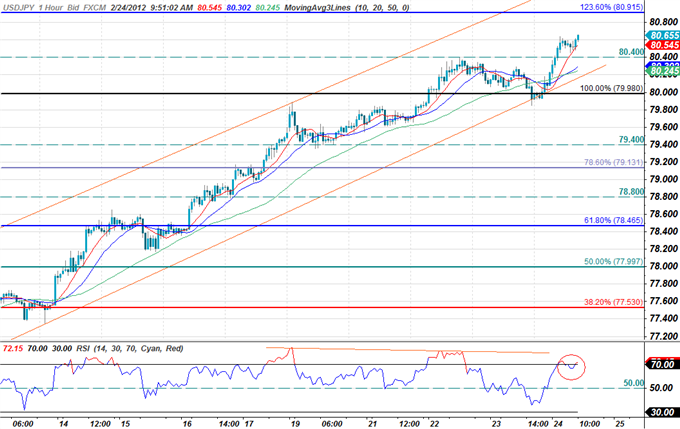 The Japanese yen is the weakest performer at the open with a decline of 0.82% at 10am in New York. The yen has suffered massive losses since the start of the month with the USD/JPY rebounding sharply off the 76-handle for an advance of more than 6% off the lows. With the Bank of Japan resuming its easing cycle, increased threat of deflation will continue to drag on the yen with our bias on the pair remaining weighted to the topside. Interim resistance targets are eyed at the 123.6% Fibonacci extension taken from the October 30th and February 1st troughs at 80.90 backed by the 138.2% extension at 81.50 and the 82-figure. Soft support rests at 80.40 with subsequent floors seen at the 100% extension at the 80-handle, 79.40 and the 78.6% extension at 79.10. Look for entry into long positions at the Asian opens with a pullback into our support targets offering entry for long positioning.