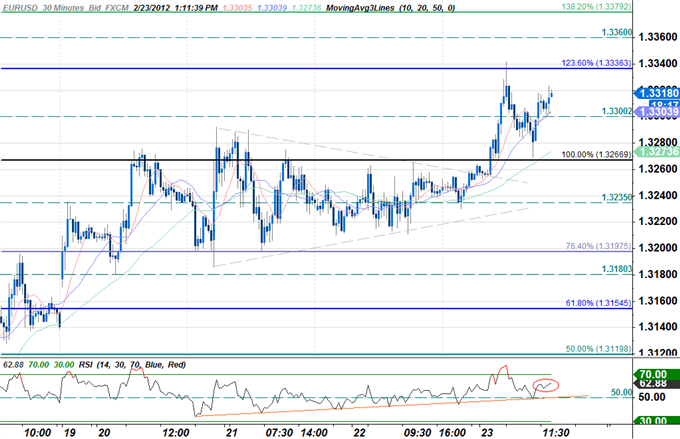 The euro is the top performing currency against a weaker greenback in North American trade with an advance of 0.54% on the session. Markets pared early losses with risk appetite taking another leg higher today after weekly jobless claims bested expectations with a print of 351K. The report marks the lowest read on weekly claims since April of 2008 with continuing claims falling to its lowest level since August of 2008.

The euro broke above the 100% Fibonacci extension taken from the February 6th and 16th troughs at 1.3265 before rebounding off the 123.6% extension at 1.3335. The single currency has now cleared critical resistance at the 1.33-figure with interim resistance holding at 1.3335 backed by 1.3360 and the 138.2% extension at 1.3380. A break back below the figure eyes subsequent support targets at 1.3265, 1.3235, and the 76.4% extension at the 1.32-handle. Look for the euro to remain well supported here with pullbacks offering long entry positions targeting subsequent topside targets. 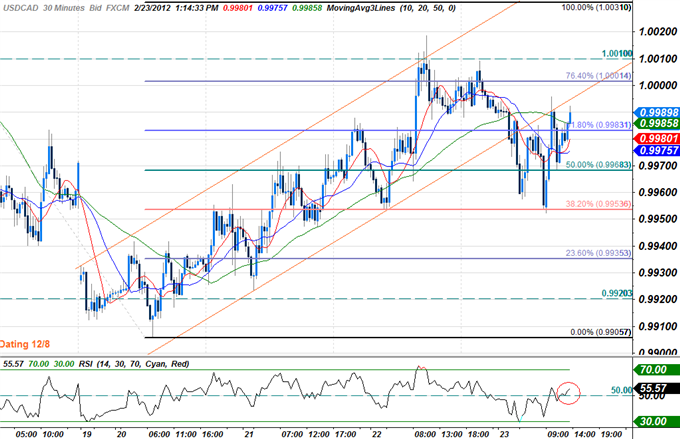 The Canadian dollar is the weakest performer in afternoon trade with the loonie advancing a meager 0.9% despite broad-based dollar losses. A fresh warning from the Bank of Canada made this morning has continued to weigh on the loonie after the central bank cited concerns over the elevated level of household debt which has reached record highs. Last month BoC Governor Mark Carney warned that consumer debt had reached 153% of disposable income in the third quarter, higher than that of the US, with the ratio expected to continue rising. The central bank now finds itself in a precarious situation as the current rate of debt limits the BoC’s scope to cut interest rates on fears that consumers could, “experience a significant shock id house prices were to reverse.” With the same respect, raising interest rates could hamper the already sluggish recovery and poses risks to Canadian growth prospects.

The loonie has continued to trade within a tight range between 9900 and parity for days now with the pair breaking below an ascending channel formation dating back to the start of the week before rebounding off the 38.2% Fibonacci extension taken from the February 9th and 20th troughs at 9955. Interim resistance now stands with former channel support backed by the 76.4% extension at parity, and the 100% extension at 1.0030. Key topside resistance continues to hold at 1.0050 with a breach above this level risking substantial loonie losses. Interim support holds at the key 61.8% extension at 9980 with a move below the 50% extension eyeing targets at 9950 and the 23.6% extension at 9935. We remain neutral on the loonie at these levels noting that rising geopolitical tensions with Iran could keep crude well supported with loonie losses (USD/CAD gains) likely to be limited as a result.