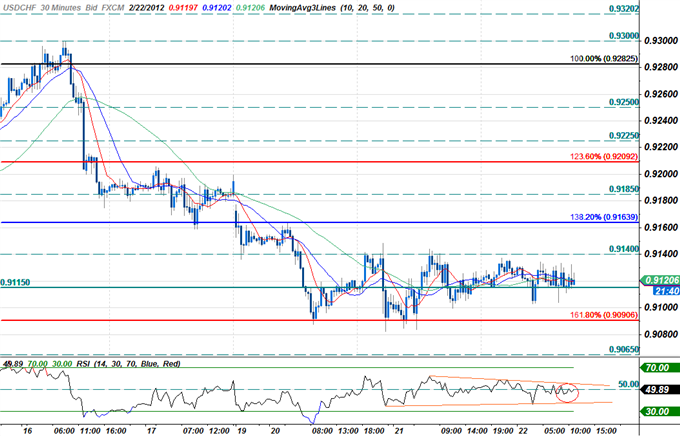 The Swiss franc is the top performer against a stronger dollar in early US trade with the pair virtually unchanged at 11am in New York. Risk appetite remains on the defensive after yesterday’s news of a Greek deal failed to stoke the risk trade with US equities taking cues from European markets to open lower on the session. The USD/CHF continues to hold above the 9115 support level with a break here eyeing subsequent targets at the 161.8% Fibonacci extension taken from the December 15th and January 8th crests at 9090, 9065, and the 176.4% extension at 9045. Interim topside resistance holds at 9140 backed by the 138.2% extension at 9164 and 9185. Look for the pair to remain under pressure as the swissie continues its advance with the franc higher against all its major counterparts early in the session. 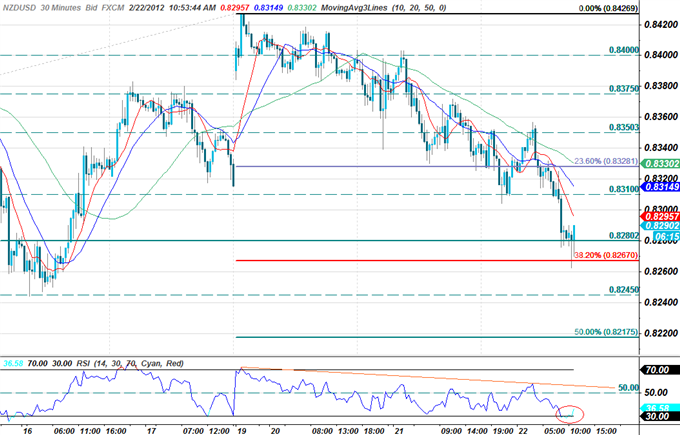 The New Zealand dollar is the weakest performer against a stronger greenback with the NZD/USD off by more than 0.80% on the session. The pair encountered strong support at the 38.2% Fibonacci extension taken from the December 8th and February 20th crests at 8267 in early US trade before paring losses back to the 8280 mark. Look for the kiwi to continue to pair losses here as risk sentiment slowly improves throughout the session with topside resistance targets held at 8310, the 23.6% extension at 8330, and 8350. A break below the 38.2% extension negates our short-term bias with such a scenario eyeing subsequent support targets at 8245, the 50% extension at 8218, and the 8200-figure. While the kiwi’s rally has been quite extraordinary this year, we look for the pair to remain well supported for now with a broader shift into risk aversion likely to trigger a larger correctional move with interim daily targets seen at 8140.