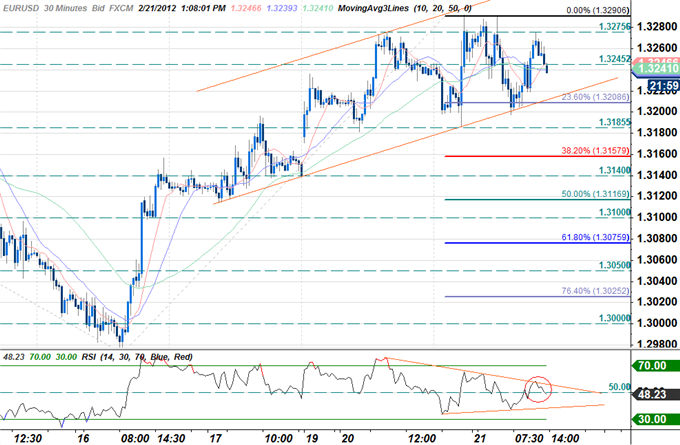 The euro is the top performing currency against a stronger dollar with a fractional advance of 0.02% at 1:30pm in New York. News that Greece had indeed secured the next tranche of bailout funds has kept the single currency well supported despite broad-based dollar gains. While concerns over the sustainability of the indebted periphery remains, the news alleviates fears over an imminent disorderly default with the euro advancing against all its major counterparts in early US trade.

Key resistance for the euro continues to hold at the convergence of the 100-day moving average and former trendline support dating back to January 10th 2012 low around the 1.33-figure. The pair has continued to hold within the confines of a short-term ascending channel formation since the 17th with interim support seen holding at the 23.6% Fibonacci extension taken from the February 9th and the overnight highs just above the 1.32-handle. A break below this level eyes subsequent support targets at 1.3185, the 38.2% extension at 1.3155, and the 50% extension at 1.3115. Topside resistance holds at the 1.33-figure backed by the 2012 highs at 1.3320. A breach here eyes subsequent topside targets with such a scenario in validating our current Fibonacci extension. We remain cautiously bearish on the euro taking small shorts against the key 1.33-resistane levels. Tomorrow traders will be eyeing key PMI data out of Germany and the euro zone with both expected to print higher for the month of February. 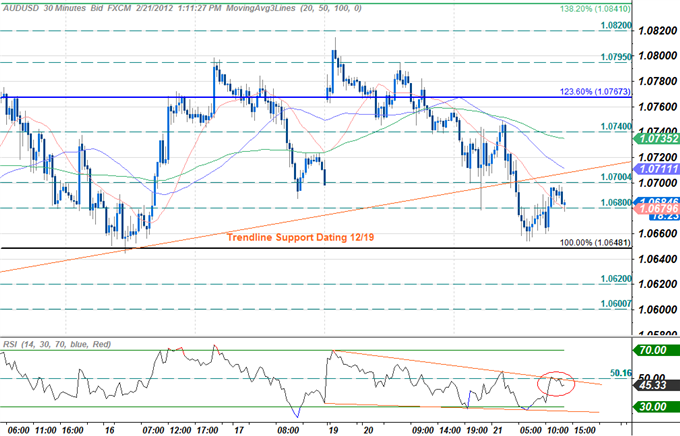 The Australian dollar is the weakest performer against the dollar in afternoon trade with a decline of nearly 0.70% on the session. Weakness in the overnight session carried over into North American trade with the aussie lower against all of its major counterparts despite a pickup in risk appetite early in the session. The pair broke below channel support dating back to the December 19th in early European trade before rebounding just ahead of the 100% Fibonacci extension taken from the December 19th and January 8th troughs at 1.0650. A close below this level eyes subsequent support targets at 1.0620, the 1.06-handle and 1.0570. Interim resistance stands with former channel support backed by 1.0740, the 123.6% extension at 1.0765, 1.0795, and 1.0820. A breach above the 2012 highs at the 138.2% extension at 1.0840 risks substantial losses for the dollar with such a scenario eyeing subsequent daily topside targets at 1.0880.