The euro is the top performing currency in early US trade with an advance of 0.20% against the greenback. The risk trade remains well supported with European equities higher by 1.4-1.6% across the board on optimism that policy makers are nearing a solution on Greece. Economic data out of the US saw the risk rally ease however after key inflation data showed the pace of price growth holding at elevated levels. January CPI came in at 2.9% y/y, topping estimates which called for a print of 2.8% y/y. Although the figure eased from a previous read of 3.0% y/y, the pace of core price growth accelerated to 2.3% y/y, up from 2.2% y/y. The data marks the highest print on core prices since September of 2008 and saw trader trim bets for further quantitative easing from the Fed. Subsequently the dollar has found some support with the greenback halting its decline in early North American trade. 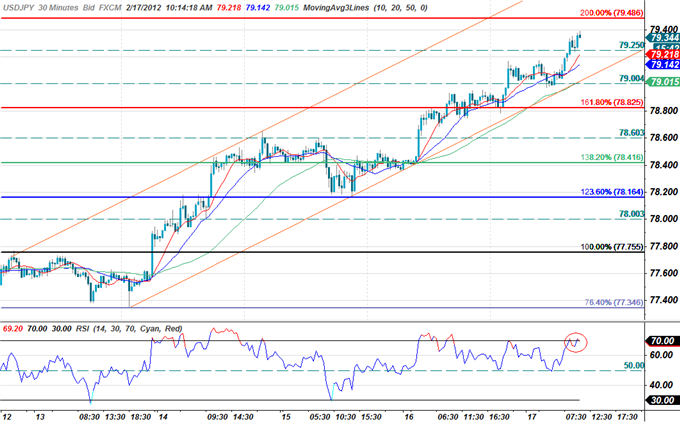 The Japanese yen is the weakest performer against the dollar with a decline of more than 0.50% on the session. Risk-on trades have continued to keep the yen under pressure with the low yielder falling against all its major counterparts throughout overnight trade. The USD/JPY has posted an advance of more than 4% since the start of the month as weak economic data out of Japan and improved risk appetite continue to weigh on yen prospects.

The pair has continued to trade within the confines of an ascending channel formation dating back to the start of the week with the exchange rate breaking above soft resistance at 79.25 in early US trade. Interim support rests here with a break below eyeing subsequent floors at the 79-figure, and 161.8% Fibonacci extension taken from the January 17th and February 1st troughs at 78.40. Interim resistance stands at the 200% extension at 79.50 backed by the 80-handle and the August intervention high at 80.20. Our outlook on the USD/JPY remains weighted to the topside with longer-term targets held as high as the 81-figure.