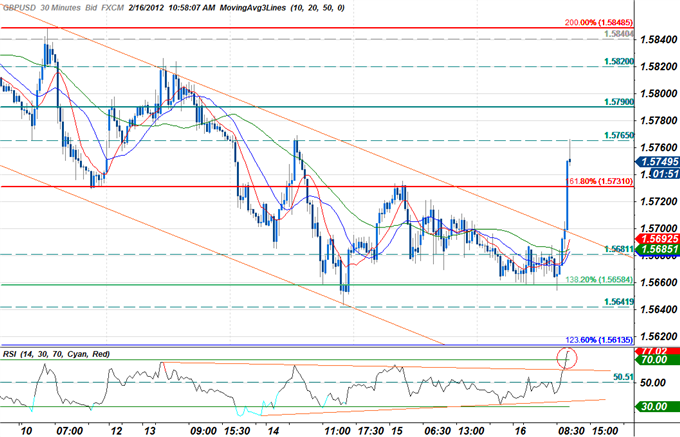 The sterling is the top performer against a weaker greenback in early US trade with an advance of 0.38% on the session. The dollar was markedly higher in overnight trade before stronger than expected weekly jobless claims saw a rebound in risk appetite with the reserve currency paring nearly all the overnight advance early in the session.

The pound broke above channel resistance dating back to February 8th before encountering soft resistance at the 1.5765 mark. A break above this level eyes subsequent ceilings at 1.5790, 1.5820, and the 200% Fibonacci extension taken from the December 29th and January 13th troughs at 1.5845. Interim support rests with the 161.8% extension at 1.5730 backed by 1.5680 and the 138.2% extension at 1.5660. A break below this level risks substantial losses for the sterling with extended support targets seen at the 50-day moving average at the 1.56-figure. The pound’s breakout today suggests that the sterling could remain well supported over the next few days with only a break back below former channel resistance flipping our bias back to the downside. 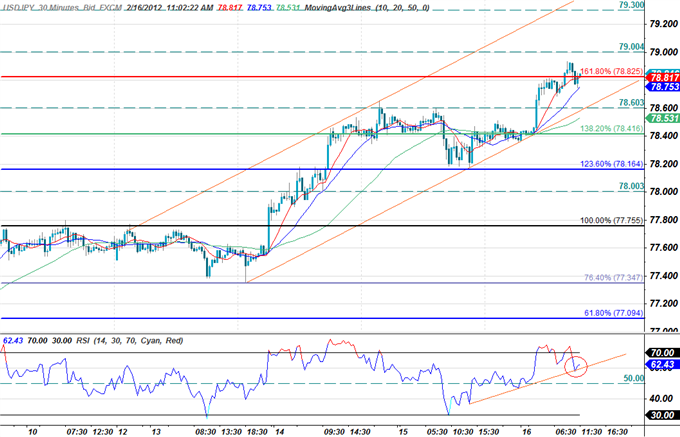 The Japanese yen is the weakest performer against the dollar with a decline of more than 0.50% on the session. The pair broke above soft resistance at 76.80 before losing steam just above the 161.8% Fibonacci extension taken from the January 17th and February 1st troughs at 78.80. The USD/JPY continues to trade within the confines of a ascending channel formation dating back to the 13th with interim resistance now eyed at the 79-figure backed by 79.30. Support rest at the convergence of the 78.60-level and channel support with a break below eyeing subsequent floors at the 138.2% ext at 78.40 and the 123.6% extension at 78.17. We continue to favor this pair higher noting that a break below RSI support is likely to trigger a bout of consolidation before moving higher.