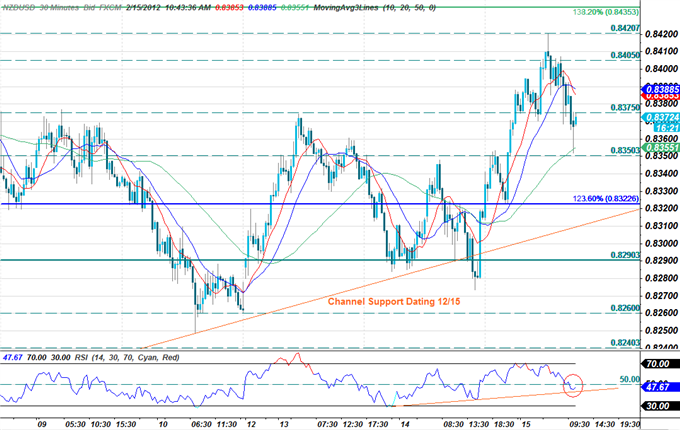 The New Zealand dollar is the top performer against the greenback in early US trade with an advance of 0.40% on the session. Risk appetite got a boost in early Asia Pacific trade after PBOC Governor Zhou Xiaochuan expressed willingness for China to be more involved with supporting the ongoing crisis in Europe. While his remarks lacked clarity or any concrete steps, markets reacted favorably with equities and risk assets rallying into the European open. Reports ahead of the US opening bell warned that EU officials may look to delay the latest Greek bailout tranche while simultaneously avoiding a default. The continued indecision and rumors circulating out of the region have continued to challenge euro stability with markets mixed at the open.

The NZDUSD broke the 2012 high in overnight trade, climbing as high as our soft target at 8420 before pulling back to 8370 in New York. Interim support now rests at 8350 with subsequent floors seen at the convergence of channel support dating back December 15th and the 123.6% Fibonacci extension taken from the October 4th and November 25th troughs at 8323. A break below this key level eyes targets at 8290, and 8260. Interim resistance stands at 8375 backed by 8405 and the overnight high at 8420. We remain cautiously bullish on the kiwi noting that the high yielder continues to track broader risk sentiment and as such, a substantial risk sell-off would likely limit intra-day kiwi advances. 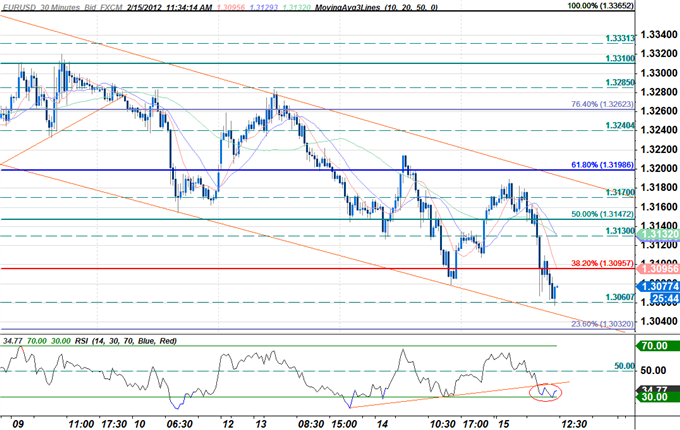 The euro is the weakest performer in US trade with a decline of more than 0.40% on the session as ongoing concerns of an imminent Greek default continue to take root. As officials continue to delay and debate the details of the required measures required for Greece to receive the next €130 billion in bailout funds, look for the euro to remain under pressure. The debt laden country now faces the possibility of default ahead of the March deadline when some €14 billion in bond redemptions and paybacks are due.

The EUR/USD continues to trade within the confines of a descending channel formation dating back to February 9th with the exchange rate hitting a fresh weekly low below the 38.2% Fibonacci extension taken from the January 15th and 25th troughs just shy of the 1.31-figure. Interim support rests at 1.3060 backed by the 23.6% extension at 1.3035. This level remains paramount on a daily basis with a break below risking substantial losses for the single currency. Topside resistance now rests with the 1.31-handle with subsequent resistance targets seen at 1.3130, the 50% extension at 1.3150, and channel resistance at 1.3170. It’s important to note that the euro remains vulnerable to headline risk with new developments out of Europe likely to fuel further volatility in the EUR/USD. As such, scalps targets should be firmly rooted in the pair’s average true range, with a 30min chart yielding profit targets of 20-22 pips.