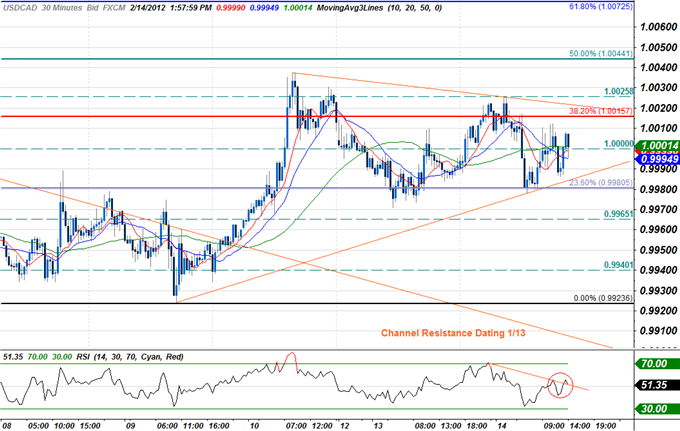 The Canadian dollar is the top performing currency against a substantially stronger greenback with the pair higher by just 0.10% at 2pm in New York. The US dollar has mounted a counteroffensive as ongoing concerns regarding the deepening crisis in Europe continues to weigh on broader market sentiment with newswires reporting today that the EU finance ministers meeting scheduled for tomorrow has been postponed on account of incomplete Greek paperwork. As markets continue to wait on further resolution to the Greek dilemma, the March deadline quickly approaches with the country facing some €14 billion in bond redemptions and paybacks due on the 20th. Compounding the problem was a statement from Moody’s Investor Services which downgraded Italy, Portugal and Spain while putting the UK on negative outlook. Accordingly, risk appetite has remained under pressure with higher yielding assets coming under pressure as the greenback was bid higher on classic haven flows.

The USD/CAD broke above channel resistance dating back to January 13th back on Thursday with the pair now consolidating into the apex of a wedge formation between the 23.6% and 38.2% Fibonacci extensions taken from the January 3rd and February 3rd troughs at 0.9980 and 1.0015 respectively. The loonie continues to straddle the parity mark with a breach above the 38.2% extension eyeing subsequent topside targets at the overnight highs at 1.0025, the 50% extension at 1.0045, and the 6138% extension at 1.0070. A break below trendline support looks for soft support at 0.9965 backed by 0.9940 and the 2012 lows at 0.9924. Our bias on this pair remains weighted to the topside noting a break above key daily Fibonacci resistance at 1.0045 coupled with and RSI break above trendline resistance needed to provide further conviction on an extended USD/CAD rally. 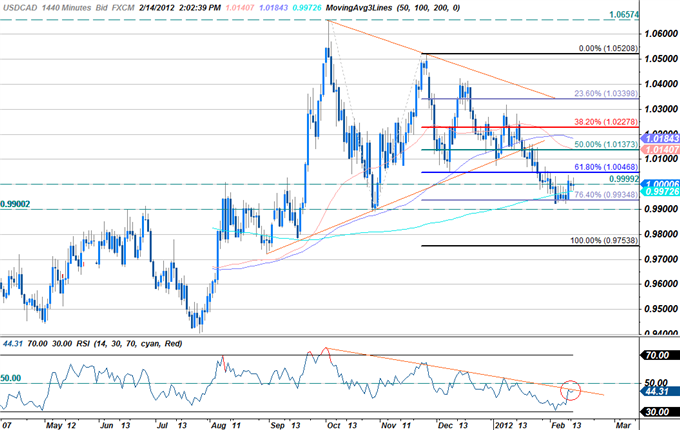 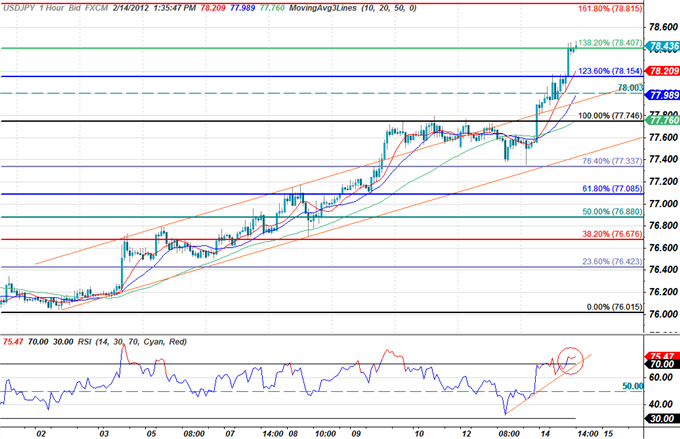 The Japanese yen is the weakest performer against the dollar at late in US trade with a decline of 1.15% on the session. The greenback is now the chief beneficiary of risk-off flows with the yen falling against all its major counterparts today. Weaker-than-expected GDP data noted in yesterday’s Winners/Losers report prompted the Bank of Japan to inject another ¥10 trillion ($128 billion) into the economy in an effort to ward off further weakness as growth prospects continue to diminish.