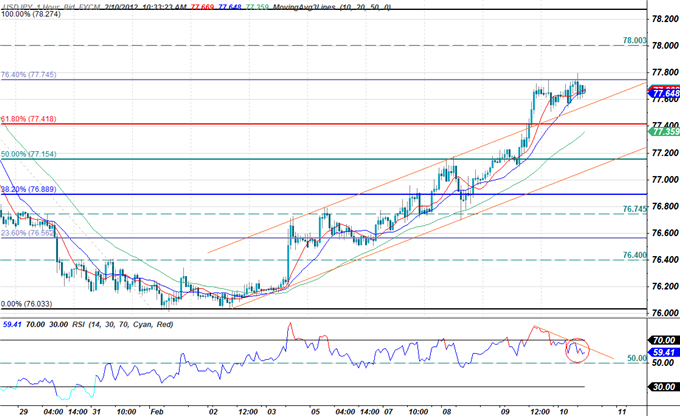 The Japanese yen is the top performer against a stronger dollar with the USD/JPY posting a fractional advance of just 0.03% an hour into US trade. Stalled Greek debt talks and a flurry of negative economic data weighed on broader market sentiment which carried over from the European session. Chinese trade balance data sparked a concerns over demand in the world’s second largest economy with January imports plummeting by 15.3% y/y, grossly missing consensus estimates which called for a print of just -3.6%. US data was also a bit heavy with the December trade balance posting a deficit of -$48.8 billion, topping calls for a print of -$48.5 billion, with the February University of Michigan consumer confidence report coming in at 72.5, missing estimates for a read of 74.8. Accordingly risk assets have continued to sell off with the dollar advancing as traders jettisoned high beta assets for the perceived safety of the reserve currency.

As we’ve often noted, the yen and the greenback both benefit from risk-aversion flows with the USD/JPY currently holding just below the 76.4% Fibonacci retracement taken from the January 25th decline at 77.75. The pair broke above former channel resistance yesterday as the yen continued its week long descent against the majors with a breach above 77.75 eyeing subsequent topside targets at the 78-figure, and 78.30. Interim support rests with former channel resistance backed by the 61.8% retracement at 77.40, 77.15, and the 61.8% retracement at 76.90. Look for the pair to hold a tight range throughout the session as risk-off flows continue to support both of the low yielders. 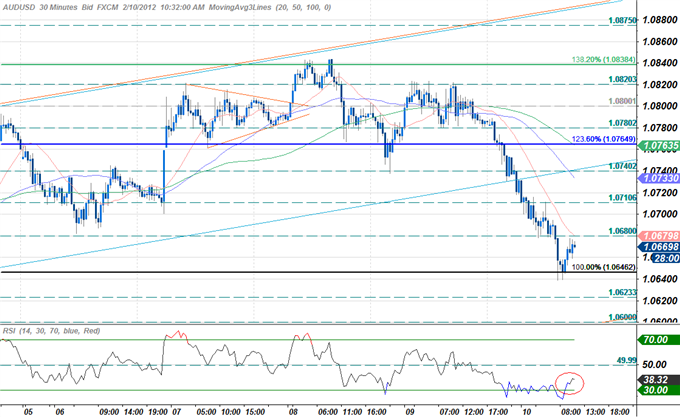 The Australian dollar is the weakest performer against the greenback with a decline of more than 1% early in the session. Soft Chinese data hit the aussie especially hard as China continues to be the largest buyer of Australian exports. A dovish monetary policy statement released overnight from the RBA further fueled the sell-off with the central bank cutting its 2012 growth and inflation forecasts. The statement went on to cite concerns over global growth prospects noting that the outlook remains ‘clouded’ by the ongoing European debt crisis and that inflation outlooks also give scope for further rate cuts if demand slows.

The AUD/USD broke below the 123.6% Fibonacci extension taken from the December 19th and January 8th troughs at 1.0765 before rebounding off the 100% extension at 1.0645 in early US trade. The pair continues to trade within the confines of an ascending channel formation dating back to mid-December with today’s decline breaking below the bisecting trendline of an Andrew’s Pitchfork. Interim support for the aussie holds at 1.0645 with subsequent floors seen at 1.0620, the 1.06-figure, and 1.0570. Key support rests lowerat the 76.4% extension at 1.0530. Interim topside resistance is eyed at 1.0680 backed by 1.0710, 1.0740 and the 123.6% extension at 1.0765. An Elliot wave count suggests that the aussie may be in the process of completing wave 4, with a hold above the 100% extension likely to see the aussie test fresh highs later next week. Should this level be compromised, look for a move below channel support, currently at the figure, to negate our short-term bias.