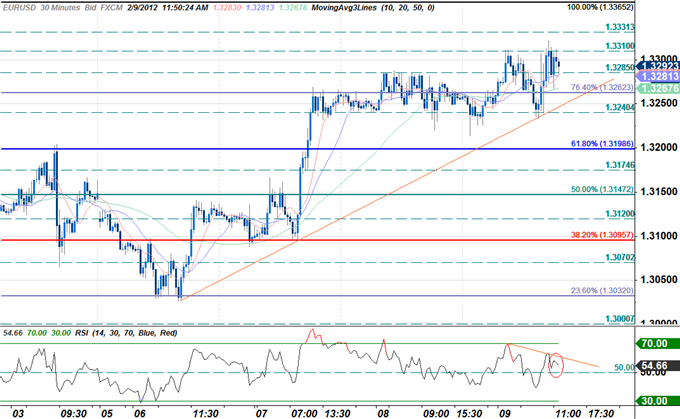 The euro is the top performer against the US dollar with an advance of 0.23% at noon in New York. The single currency has remained well supported throughout the session after the ECB held interest rates at 1.00% with President Mario Draghi citing that economic conditions in Europe have shown signs of stabilization while noting that inflation is likely to remain above the 2% target for several months before declining. Draghi went on to note that the “subdued global demand growth, the remaining tensions in euro area sovereign debt markets and their impact on credit conditions, as well as the process of balance sheet adjustment in the financial and non-financial sectors, continue to dampen the underlying growth momentum.” Meanwhile reports have continued to cross the wires that Greek officials have reached a deal on the strict austerity measures required of the nation in order to receive the next tranche of bailout funds to the tune of €130 billion.

The euro held above the 76.4% Fibonacci extension taken January 16th and 25th troughs at 1.3260 with the single currency spiking as high as 1.3320 as Draghi took the stand. Interim support holds at the extension with subsequent downside targets seen at 1.3240, the 61.8% extension at 1.32, and the 50% extension at 1.3150. A daily outlook on the euro does see room for further topside moves with price action holding within the confines of an ascending channel dating back to the January 16th lows. The single currency looks to be in the process of completing wave three of the advance off the 1.2625 with a confirmed breach above the 1.32-figure targeting subsequent resistance targets at the 100-day moving average at 1.3330, the 100% extension at 1.3365, and the 1.34-handle. Tomorrow traders will be eying data out of Germany with key inflation data on tap. 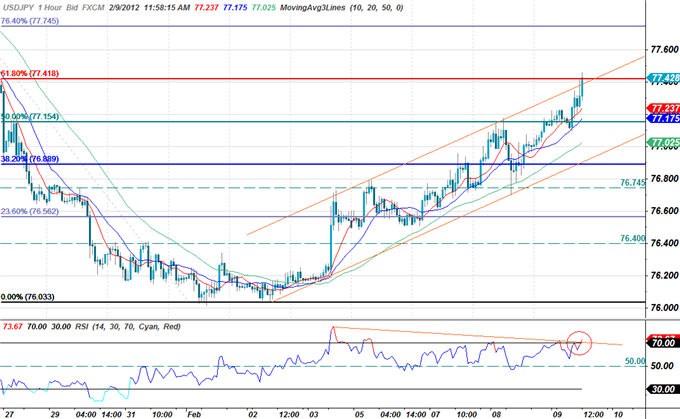 The Japanese yen is the worst performer among the majors with a decline of nearly 0.50% against the dollar. As risk assets remain well supported, the yen has continued to come off with low yielder falling against all its major counterpart in North American trade. The USD/JPY continues to hold within the confines of an ascending channel formation with the exchange rate testing the convergence of channel resistance and the 61.8% Fibonacci retracement taken from the January 25th decline at 77.40. A breach here eyes topside targets at 76.60, the 76.4% extension at 77.75, and the 78-figure. Interim support rests with the 50% extension at 77.15 with subsequent floors seen at the 38.2% extension at 76.90 and 76.75. Look for the yen to remain under pressure so long as broader risk appetite remains well supported with a move into risk aversion likely to weigh on the pair as haven flows continue see yen advances outpace those of the dollar.