US Dollar Mounts Counteroffensive Ahead of ECB, BoE- Sterling Heavy 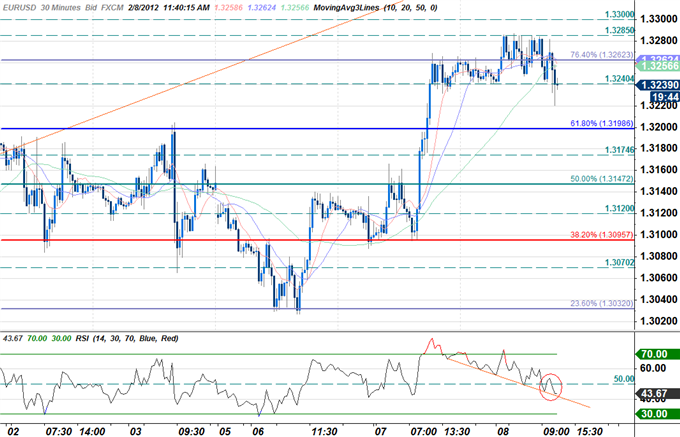 The euro is the top performing currency against a stronger dollar with a decline of just 0.17% on the session. The greenback surged in early US trade as markets continue to await further details regarding the impending Greek debt-swap deal. Risk assets abruptly came off with US equities paring early gains to trade markedly lower at noon in New York. The single currency has remained rather resilient this morning despite the risk sell-off with the EUR/USD holding above soft support at 1.3240 at the time this article was published.

A break below interim support eyes subsequent downside targets at the 61.8% Fibonacci extension taken from the January 15th and 25th troughs at the 1.32-figure, 1.3175, and the 50% extension at 1.3150. Initial support stands at the 76.4% extension at 1.3260 backed by 1.3285 and the 1.33-hanlde. This level represents significant resistance for the single currency with a daily Fibonacci extension taken from the October 4th and January 16th troughs revealing a 61.8% extension at 1.3295. The level converges with former long-standing trendline support, now resistance, dating back to January 10th of 2011 and is backed by the 100-day moving average at 1.3330. A breach above this level risks substantial losses for the dollar with such a scenario eyeing subsequent topside targets at 1.3380 and the 1.34-handle. 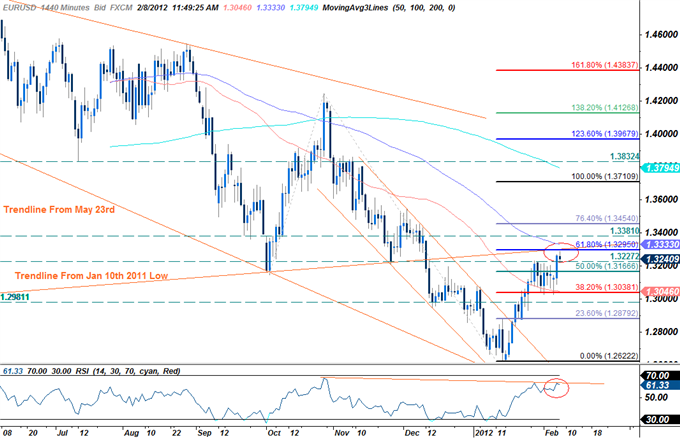 Traders will be closely eyeing tomorrow ECB interest rate decision a subsequent press conference with President Mario Draghi. Although the central bank is widely expected to hold the benchmark interest rate at 1.00%, investors will be lending a keen ear to Draghi’s remarks as he gives his assessment of current economic conditions in the euro region. Specific comments with regards to the Greek crisis and its impact on the broader euro economy are likely to take center stage with the euro likely to find solace if Draghi continues to talk down the risk of a Greek-euro exit. 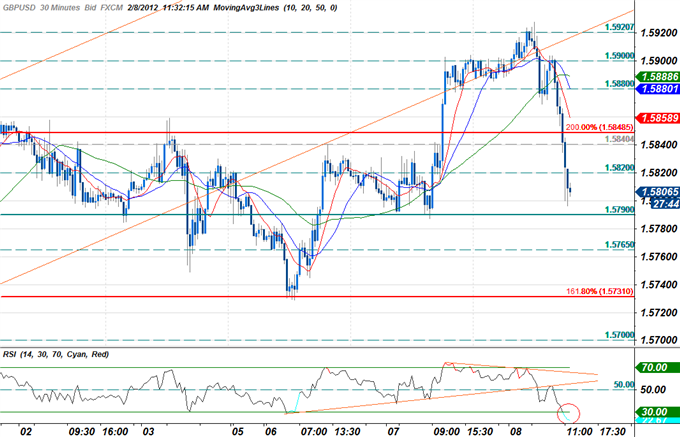 The British pound is the weakest performer in North American trade with a decline of nearly 0.60% against the dollar. The sterling broke below the 200% Fibonacci extension taken from the December 29th and January 13th troughs at 1.5850 before rebounding off key support at the 1.58-handle. This level remains paramount for the sterling with the daily chart below showing the key 61.8% Fibonacci extension resting at 1.5790. A break below this level risks further losses for the pound with subsequent support targets seen at 1.5765, the 161.8% extension at 1.5730 and the 1.57-figure. Interim resistance now stands at 1.5820 backed by 1.5850, 1.5880 and the 1.59-handle. Look for the sterling’s losses to ease as we head into the close of trade in New York with further developments out of Europe likely to drive price action. 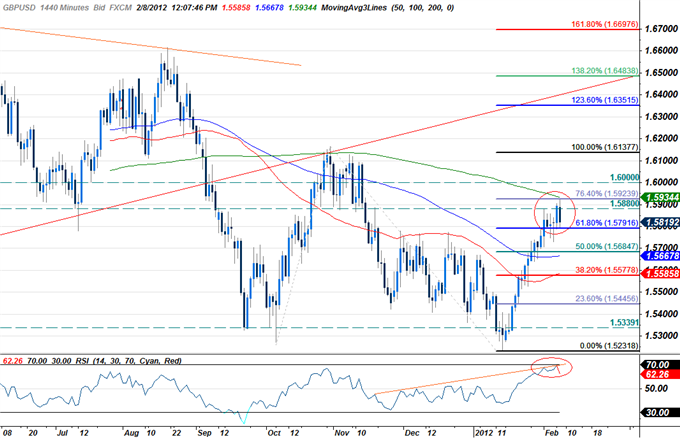 Tomorrow’s economic docket sees a flurry of data out of the UK with the BoE interest rate decision highlighting the calendar. Although the BoE is also expected to leave rates unchanged at 0.50%, traders will be specifically eyeing the central bank’s asset purchase target with consensus estimates calling for the central bank to expand its asset purchase facility by an additional £50 billion in an effort to support the nation’s slowing recovery. While this would typically weigh on the pound, it’s likely that the expansion in stimulus has already been priced-in at this point. Still, tomorrow’s data flow represents added event risk with key industrial & manufacturing production data and the December trade balance on tap.