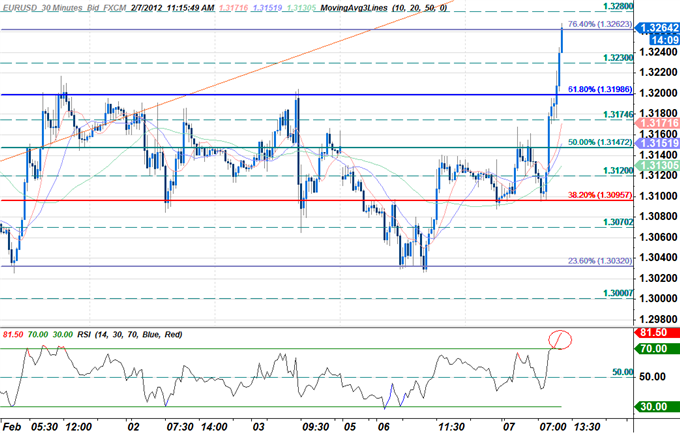 The euro surged more than 1% in early North American trade as rumors circulated that a Greece may be close to agreeing on the measures needed to secure further bailout funds and that a draft of the agreement was in the process of being created. The news gave a boost to broader market sentiment with equities reversing early losses and higher yielding currencies advanced. While today’s developments do little to address the underlying lack of competitive advantage for Greece, the move does avert an imminent disorderly default. Accordingly, the euro is likely to remain well supported in the interim with a pullback of some magnitude expected at the European close.

The euro broke above interim resistance at the 50% Fibonacci extension taken from the January 15th and 25th troughs at 1.3150 before encountering resistance at the 76.4% extension at 1.3260. Subsequent topside targets are eyed at 1.3280 and the 1.33-handle. Interim support holds at the 61.8% extension at the 1.32-handle backed by 1.3175, the 50% extension at 1.3150, and the 1.31-figure. Look for the euro rally to ease as we head later into the session with further developments out of Europe likely to spark additional volatility in the pair. Overnight traders will be eyeing data out of the Euro-zone with German and French trade balance figures on tap. 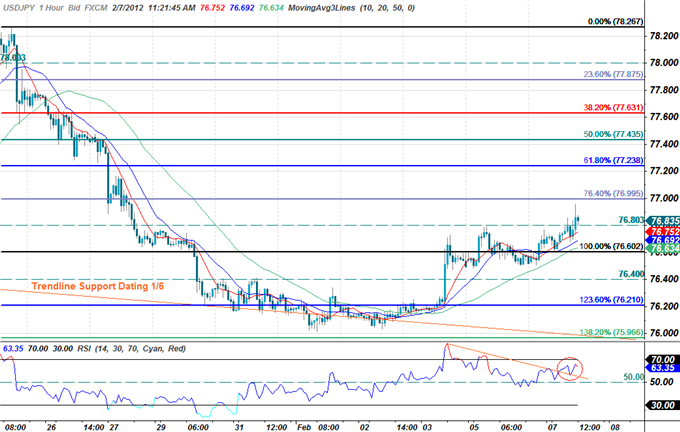 The Japanese yen is the weakest performer against a softer dollar with the USD/JPY higher by more than 0.34% on the session. The yen is weaker against all its major counterparts as investors jettisoned lower yielding assets in favor of risk, with the USD/JPY slowly advancing as yen losses continue to outpace those of the dollar. The pair broke above interim resistance at the 100% Fibonacci extension taken from the December 22nd high and November 25th crests at 76.60 in overnight trade with topside resistance targets held at the 76.4% extension at the 77-figure, the 61.8% extension at 77.25 and 77.40. Interims support now holds at 76.60 with subsequent floors seen at 76.40 and the 123.6% extension at 76.20. Overnight traders will be eyeing data out of Japan with the December current account balance and the January Eco watchers surveys on tap.