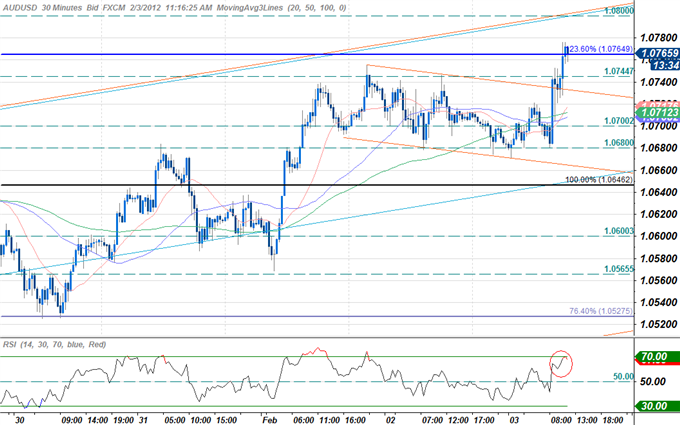 The Australian dollar is the top performing currency against the greenback in early US trade with an advance of 0.47% on the session. Today’s blow-out non-farm payroll report showed the domestic economy added 243K jobs in January, besting calls for a print of just 140K with the unemployment rate unexpectedly falling to 8.3% from 8.5%. The report bodes well for the reserve currency as strong US data reduces the likelihood of further dollar diluting quantitative easing measures from the Fed. Still, the positive print continues to fuel the recent risk rally with high yielding assets advancing early in the session.

The AUD/USD continued to trade within the confines of an ascending channel formation dating back to December 19th with the pair currently trading just above the 123.6% Fibonacci extension taken from the December 19th and January 8th troughs at 1.0765. Topside targets for the aussie are eyed at the convergence of channel resistance and soft resistance at the 1.08-figure, backed by the 138.2% extension at 1.0835 and 1.0875. Interim support rests at 1.0745 with subsequent floor seen at the 1.07-handle, 1.0680, and the 100% extension at 1.0645. Look for topside moves in the aussie to remain tempered as we head into the weekend with trader looking to next week’s RBA interest rate decision where the central bank is expected to cut interest rates by 25-basis points. 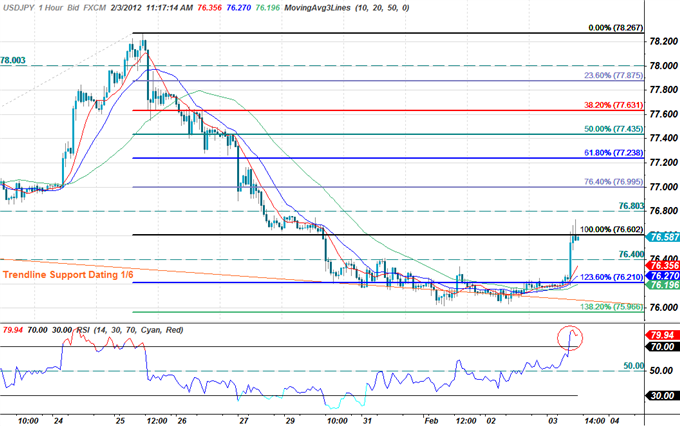 The yen is the weakest performer against the dollar in at noon in New York with the USD/JPY advancing 0.50% on the session. The yen remains under pressure as risk appetite continues to improve with investors jettisoning lower yielding assets in favor of risk. The yen is weaker against all its major counterparts with the aussie toping the yen performance chart in early trade. Look for the yen to remain under pressure as Japanese officials continue to cite concerns regarding over appreciation in the yen with any advances in the low yielder likely to remain tempered.

The USD/JPY pair broke back above the 123.6% Fibonacci extension taken from the December 22nd and January 25th crests at 76.20 before encountering resistance at the 100% extension at 76.60. This level is likely to hold throughout North American trade with a breach eyeing subsequent ceilings at 76.80 and the 76.4% extension at the 77-figure. Initial support comes in at 76.40 backed by the 123.6% extension at 76.20 and the 138.2% extension at the 76-handle. Again we note that intervention concerns are likely to limit the magnitude of any yen advances with our bias on the pair remaining weighted to the topside.