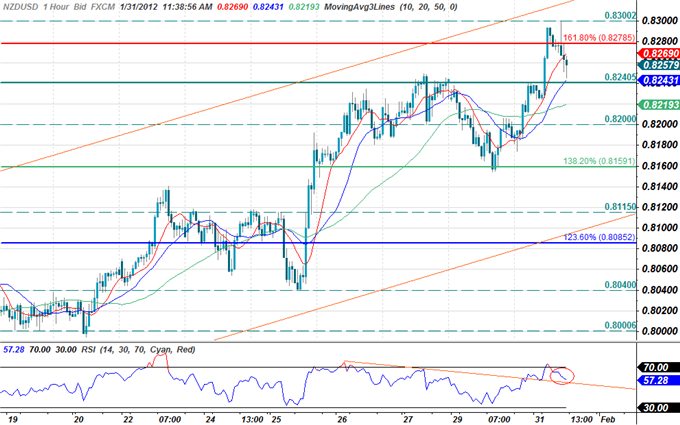 The New Zealand dollar is the strongest performing currency against a mixed greenback in early US trade with the pair advancing nearly 0.80 on the session. Risk appetite remained well supported in European trade before weaker than expected US economic data weighed heavily on broader market sentiment, with higher yielding risk currencies paring early advances. The S&P Case-Shiller composite came in at -3.67% y/y, missing calls for a read of -3.3% y/y with January consumer confidence grossly missing consensus estimates with a print of 60.2, down from a previous read of 64.8. Markets were looking for a print of 68.0 which would have marked an 11-month high on the survey. Equity markets quickly pared early advances with a wave of risk aversion now dominating the US trade session.

The NZD/USD briefly broke above the 161.8% Fibonacci extension taken from the November 25th and December 15th troughs at 0.8280 before paring gains with interim support eyed at 0.8240, the 0.82-figure, and the 138.2% extension at 0.8160. The pair has continued to trade within the confines of an ascending channel formation dating back to December 15th low with a break below channel support at 0.8115 risking substantial losses for the kiwi. We look for a break of this level later this week as seasonality trends kick in with subsequent downside targets eyed at the 123.6% extension at 0.8085 and 0.8040. Topside resistance holds at 0.8280 with subsequent ceilings eyed at the 0.83-handle and 0.8340. 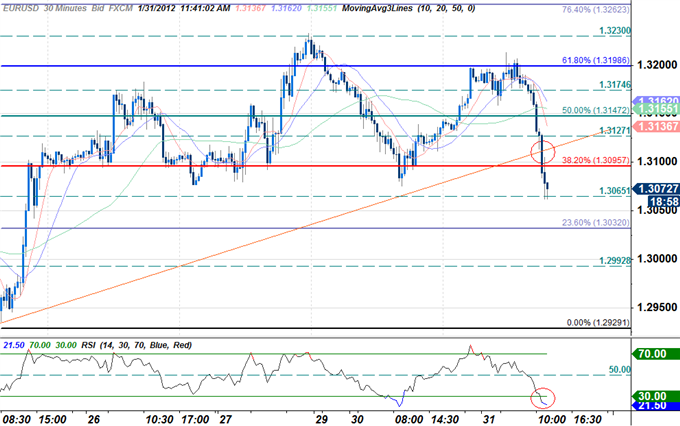 The euro is the weakest performer against the dollar at noon in New York with the pair off by more than 0.50% on the session. The single currency remains at risk as stalled Greek PSI talks and disappointing German retail sales data coupled with the weaker than expected consumer confidence print to halt the overnight rally in risk assets. The euro broke below key channel support dating back to the January 16th low before encountering soft support at the 1.3065 level. As we’ve cited in earlier reports we look to this weakness in the euro to accelerate heading into the start of February as seasonal trends dictate with a break below interim support eyeing subsequent targets at the 23.6% Fibonacci extension taken from the January 15th and 25th troughs at 1.3030, the 1.30-figure, and 1.2930. Topside resistance is eyed at the 38.2% extension just below the 1.31-handle, 1.3130, and the 50% extension at 1.3150. Tomorrow traders will be eyeing data out of the Euro-zone with the January German and EU manufacturing PMI and the advanced CPI estimate on tap.