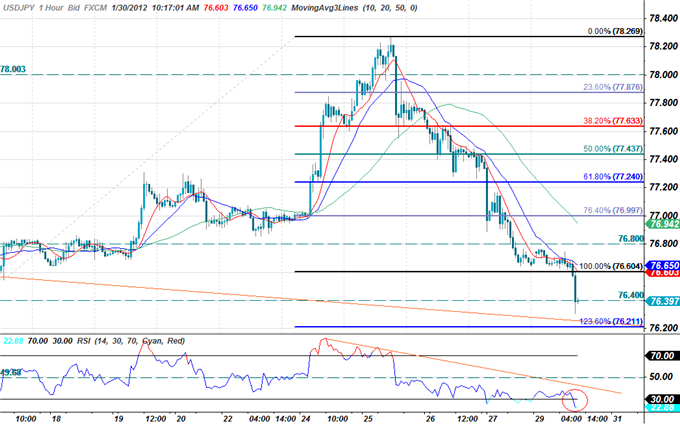 The Japanese yen is the top performing currency against a stronger dollar in early North American trade with an advance of 0.38% on the session. Risk appetite is back on the defensive today as Greek PSI talks continue to break down with European and US equities in the red at the start of trade in New York. Classic risk on flows are in effect with the dollar and the yen outperforming their major counterparts as investors jettisoned higher yielding assets for the relative safety of the reserve currency. Economic data out of the US this morning was mixed with December personal income posting its largest advance in nine months with a read of 0.5%, topping expectations for a print of 0.4%. Personal spending however was flat as households upped savings amid uncertainty about the domestic economy. When adjusted for inflation, spending contracted by 0.1% in December halting a three month advance discretionary spending.

The USD/JPY broke below the 100% Fibonacci extension taken from the December 22 and November 25th crests at 76.60 before finding solace around 76.40. Interim support is eyed at the 123.6% extension at 76.20 with subsequent downside targets held at the 76-figure and the 161.8% extension at 75.60. Interim resistance holds at 76.60 backed by 76.80 and the 76.4% extension at the 77-handle. As the pair moves lower look for increased rhetoric out of Japanese officials to cool the yen’s appreciation with yen advances likely to remain tempered on concerns over further central bank intervention. The Japanese economic docket sees a flurry of data on tap overnight with the December jobless rate, household spending, industrial production, and housing starts highlighting the calendar. 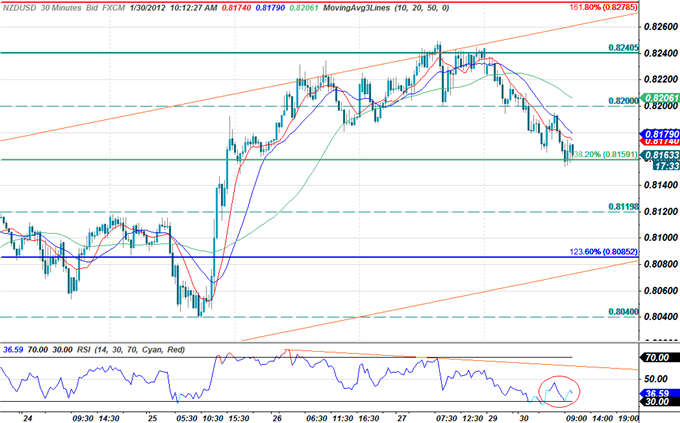 The New Zealand dollar is the worst performer two hours into the session with the kiwi off by more than 1% on the session. The high yielders are likely to remain under pressure with the NZD/USD breaking below soft support at the 0.82-figure in overnight trade. Look for the sell-off to intensify as European concerns come back into focus with the EU leader’s summit underway in Brussels. The kiwi continues to hold within the confines of an ascending channel formation dating back to December 15th with a break below interim support at the 138.2% Fibonacci extension taken from the November 25th and December 15th troughs at 0.8160 eyeing subsequent floors at 0.8120, the 123.6% extension at 0.8085, and 0.8040. Topside resistance is now eyed at the 0.82-handle backed by 0.8240 and the 161.8% extension at 0.8275. Overnight traders will be eyeing December building permits with consensus estimates calling for a print of 8.0% m/m, a dramatic improvement from the -6.4% m/m seen a month earlier.