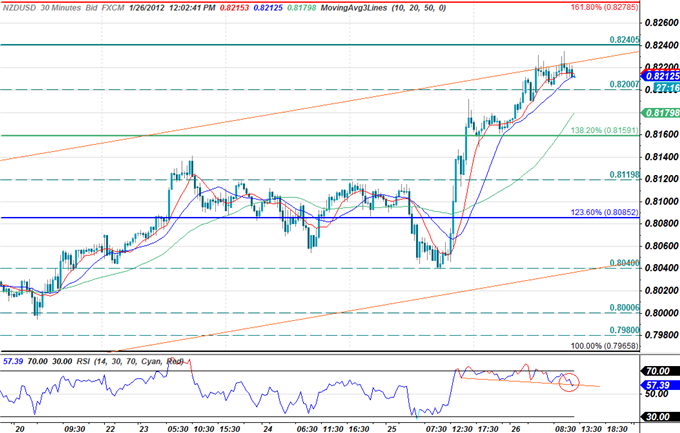 The New Zealand dollar is the top performer against a weaker greenback at noon in New York with an advance of 0.60% on the session. Risk appetite has remained rather well supported since yesterday when the Fed vowed to keep interest rates near record lows through late 2014. The move by the central bank has weighed heavily on the greenback with the reserve currency declining against all its major counterparts as investors jettisoned haven plays in favor of high beta assets. Yesterday the Reserve Bank of New Zealand kept interest rates at 2.50% as expected with Governor Alan Bollard citing that the, “domestic economy continues to see modest growth,” although, “given the ongoing uncertainty around global conditions and moderate pace of domestic demand, its remains prudent to keep the official cash rate on hold.” The governor went on to note that although inflation pressures are “well contained,” appreciation in the kiwi continues to reduce returns for exporters and that the EU crisis will, “likely pressure New Zealand bank funding costs.” The kiwi has remained well supported nonetheless as risk appetite remains well buoyed in US trade.

The NZD/USD has continued to trade within the confines of an ascending channel formation dating back to December 15th with the pair attempting to breach channel resistance in early US trade. Interim support for the kiwi rests at the 0.82-figure with subsequent floors seen at the 138.2% Fibonacci extension taken from the November 25th and December 15th troughs at 0.8160, and 0.8120. Stronger support is seen at the 123.6% extension at 0.8085. A breach above channel resistance eyes topside targets at 0.8240 backed by the 161.8% extension at 0.8280 and the 0.83-figure. The kiwi is likely to hold within this formation into the close of the week after four days of consecutive advances. Our long-term bearish bias on the kiwi remains intact with only a break below channel support triggering short scalp positions. Overnight traders will be eyeing data out of New Zealand with December trade balance figures on tap. 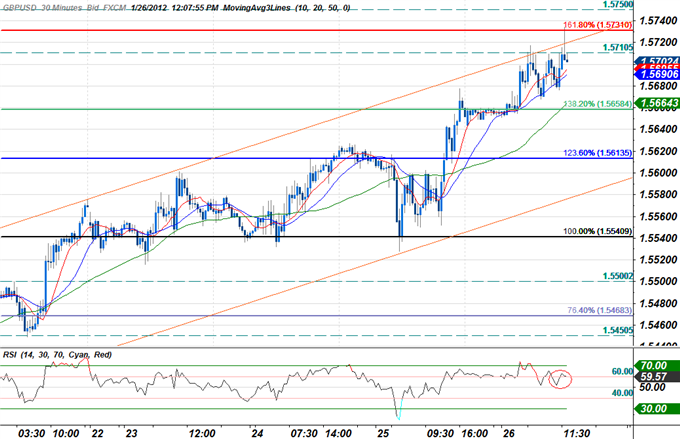 The British pound is the weakest performer and continues to lag its major counterparts despite broad-based dollar losses. A weaker than expected print on January CBI reported sales weighed on the sterling with the pair holding below soft resistance at 1.5710. The GBP/USD has continued to trade within the confines of an ascending channel formation dating back to January 13th with the pair failing a breach attempt in early US trade. Interim support rests at the 138.2% Fibonacci extension taken from the December 29th and January 13th troughs at 1.5658 backed by the 123.6% extension at 1.5615 and channel support. A break below the channel formation risks accelerated losses for the pound with subsequent floors seen at the 100% extension at 1.5540, and the 1.55-figure. Topside resistance holds at 1.5710, with a breach eyeing targets at the 161.8% extension at 1.5730 and 1.5750. With no data on tap out of the UK for the remainder of the week, look for the pound to hold its recent range ahead of tomorrow’s US advanced 4Q GDP print where consensus estimates call for an annualized print of 3.0%, up from a previous read of 1.8%.