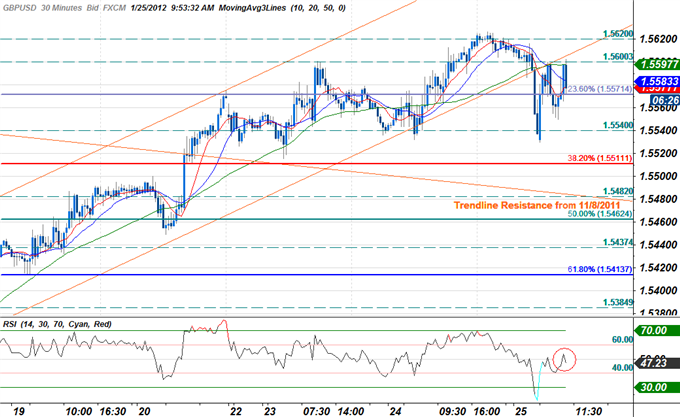 The British pound is the top performer against a stronger dollar for the second consecutive day with a decline of just 0.30% in early US trade. The greenback has remained well supported ahead of the FOMC interest rate announcement later today, with the reserve currency advancing against all its major counterparts. Minutes from the January Bank of England monetary policy meeting have helped support the sterling as the MPC struck a less dovish tone on future policy. Although the central bank cited that further asset purchases were ‘likely,’ members noted that the risk for inflation is more ‘finely balanced’, easing concerns that the BoE will undershoot the 2% inflation target. The remarks offset a weaker than expected print on the 4Q GDP which showed a contraction of 0.2% q/q, missing calls for a contraction of 0.1% q/q.

The GBP/USD broke below channel support dating back to January 16thin overnight trade before rebounding off soft support at 1.5540. Interim support now rests with the 23.6% Fibonacci extension taken from the December 21st and January 3rd crests at 1.5570 with subsequent support targets seen at 1.5540, the 38.2% extension at 1.5510 and former trendline resistance, now support at 1.5480. Topside resistance is eyed at the 1.56-figure backed by 1.5620 and 1.5645. The pound is likely to remain under pressure over the next few hours with the FOMC interest rate decision on tap. Should the accompanying Fed statement show no mentions of further easing, look for the dollar’s advance to accelerate with the pair eyeing subsequent support targets. 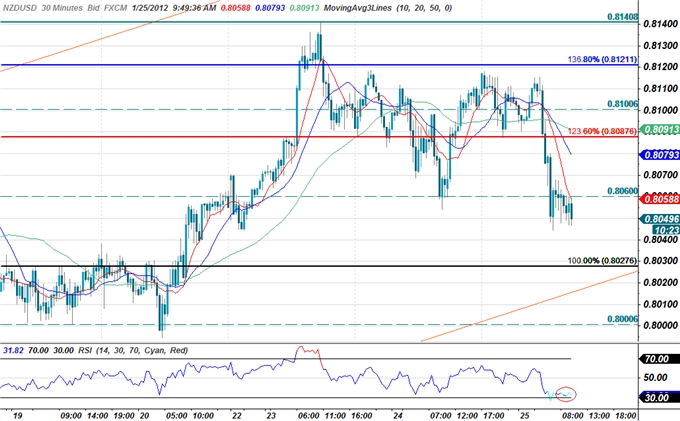 The New Zealand dollar is the weakest performer against the greenback with a decline of 0.85% on the session. A move into risk aversion in European trade carried over into the US session with higher yielding assets coming under pressure as the dollar pressed higher. Continued concerns over stalling Greek PSI negotiations have weighed on broader market sentiment with the ECB citing today that it would not accept haircuts on Greek debt. The kiwi remains at risk ahead of the Reserve Bank of New Zealand interest rate decision later this evening with the central bank widely expected to hold rates at 2.50%.

The NZD/USD broke back below the 123.6% Fibonacci extension taken from the December 29th and January 8th troughs at 0.8087 in overnight trade before settling just below the 0.8060 level. Interim resistance now stands here with a breach eyeing subsequent ceilings back at 0.8087, the 0.81-figure, and the 136.8% extension at 0.8120. Support rest lower at the 100% extension at 0.8030 backed by the 0.80-handle and 0.7980. Look for the pair to follow broader market sentiment with the greenback’s rally likely to limit topside moves in the interim. Event risk mounts later in the day for the kiwi with the RBNZ rate decision and the December business performance of manufacturing index.