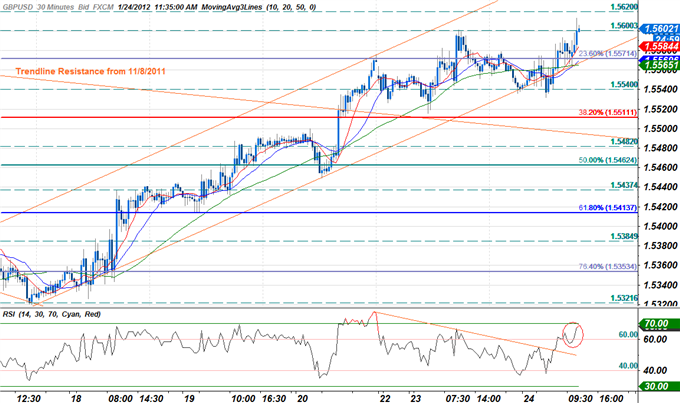 The British pound is the top performing currency against a stronger greenback in early US trade with an advance of 0.24%. The dollar has mounted a counter-offensive after yesterday’s broad based sell-off with the reserve currency advancing against all its major counterparts save the sterling. The pound was the weakest performer yesterday and continues to decouple from moves in its European counterparts with positive data out of the UK continuing to support the sterling in the interim. December public sector net borrowing came in at £10.8B, besting calls for a print of £12.1B, suggesting that the newly implemented austerity measures may be taking effect with the figure coming off a previous read of £15.1B. The data helped temporarily ease concerns regarding the UK economy as high unemployment and low growth has fueled speculation that the Bank of England will need to introduce further easing measures by way of expanding asset purchases past the £275 billion threshold already committed by the MPC.

The GBP/USD has continued to trade within the confines of an ascending channel formation dating back to January 16thwith the 1.56-figure capping advances over the past 24-hours. Our medium-term bias remains weighted to the downside on the pound noting interim support at the 23.6% Fibonacci extension taken from the December 21st and January 3rd crests at 1.5570. Subsequent floors are seen lower at 1.5540, the 38.2% extension at 1.5510, and 1.5480. A break above the 1.56-handle eyes topside targets at 1.5620, 1.5650, and the January 3rd high at 1.5670. Traders will be eyeing key UK economic data with 4Q GDP, the BoE minutes, and CBI trends orders on tap for tomorrow. The bank of England minutes will also be closely eyed as speculation for further easing continues to take root. 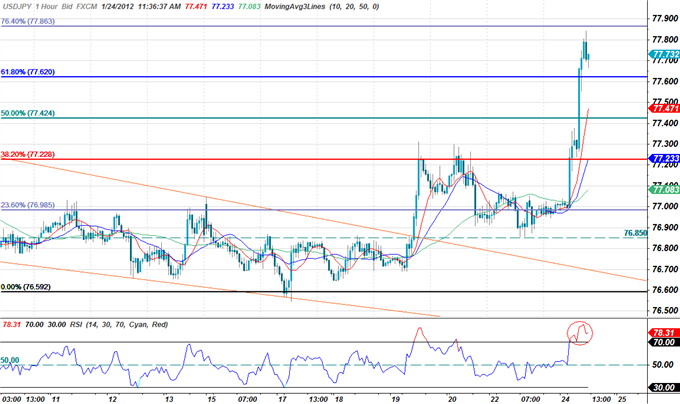 The Japanese yen is the weakest performing currency with a decline of nearly 0.90% against the dollar. The Bank of Japan held interest rates at 0.10% as expected with the central bank making no mention of further easing to monetary policy. The BoJ also cut Japan’s growth forecast for both 2011 and 2012 citing concerns over appreciation in the yen and a slowdown in overseas economies. For fiscal 2012, the central bank expects GDP growth of just 2%, down from the previous 2.2% projections. Accordingly the yen has come under pressure across the board with the low yielder falling against all its major counterparts.

After holding an incredibly tight range for the entire month, the USD/JPY pair finally broke above the 38.2% Fibonacci extension taken from the November 18th and January 4th troughs at 77.22 in early European trade. The pair ran out of steam just ahead of the 76.4% extension at 77.85, where interim resistance now stands. A breach here eyes subsequent topside targets at the 78-figure and 78.25. Interim support now rests at the 61.8% extension at 77.60 backed by 77.40 and the 38.2% extension at 77.22. Overnight traders will be eyeing data out of Japan with the December merchandise trade balance figures on tap. Trade deficits are expected to ease with imports called lower on a year on year basis.