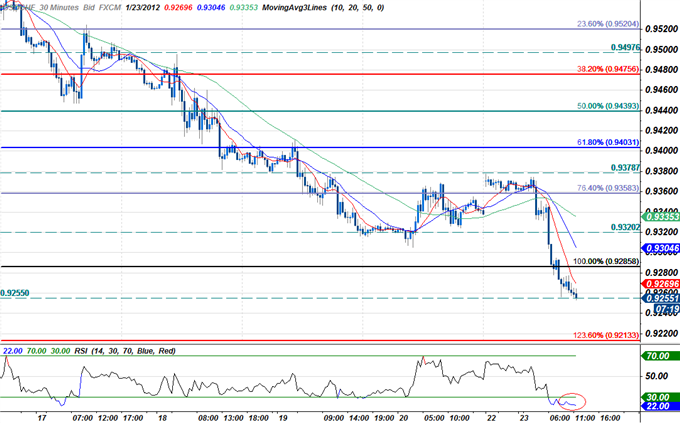 The Swiss franc is the top performing currency against a weaker US dollar in early US trade with the swissie surging nearly 1% two hours into North American trade. Risk appetite improved overnight ahead of the European finance ministers meeting in Brussels where officials will discuss new budget rules and further private sector haircuts on Greek debt. The dollar has come under substantial pressure with the greenback falling against all its major counterparts early in the session. Optimism about Europe’s ability to address the deepening debt crisis has fueled a short-covering rally in the euro with the swissie benefitting from the EUR/CHF peg. The Swiss National Bank has continued to cite unwavering resolve to maintain the 1.20 peg to the euro with the EUR/CHF pair continuing to approach the key level. 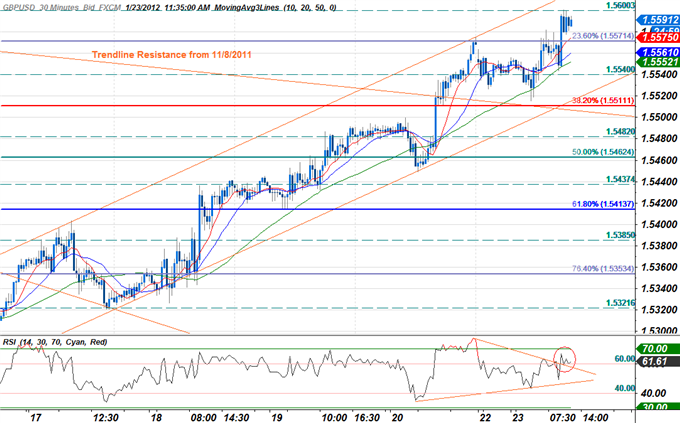 The British pound is the weakest performer in US trade and continues to lag its counterparts with the sterling advancing just 0.09% despite broad-based dollar losses. With the exception of the yen, the pound has been the weakest performing currency against the greenback in 2012 with the pair advancing just 0.25% year-to-date in comparison with the euro and the franc which have advanced 0.56% and 1.23% respectively. Ongoing concerns regarding the domestic economy have continued to weigh on sterling prospects as the threat of stagflation curbs demand for pound. Although inflation has been easing, high unemployment and low growth has fueled speculation that the Bank of England will need to introduce further easing measures by way of expanding asset purchases past the £275 billion threshold already committed by the MPC. Historically these conditions have led to substantial losses for the respective currency with UBS citing expectations for the asset purchase program to reach as high as £500 billion by the end of 2012.

The pound has continued to trade within the confines of an ascending channel formation dating back to January 16th with the pair breaching the 23.6% Fibonacci extension taken December 21st and January 3rd crests at 1.5570 before encountering resistance at the 1.56-figure. Although the pair recently broke above trendline resistance dating back to the November 8thhigh, the subsequent advance continues to lack follow through or conviction. The sterling is likely to continue to lag the majors amid risk-on environments with a breach above the figure eyeing subsequent topside targets at 1.5650 and the January 3rd high around 1.5670. A break below interim support eyes floors at 1.5540, the 38.2% extension at 1.5510, and 1.5480. Overnight traders will be eyeing economic data out of the UK with December public financing and net borrowing figures on tap.