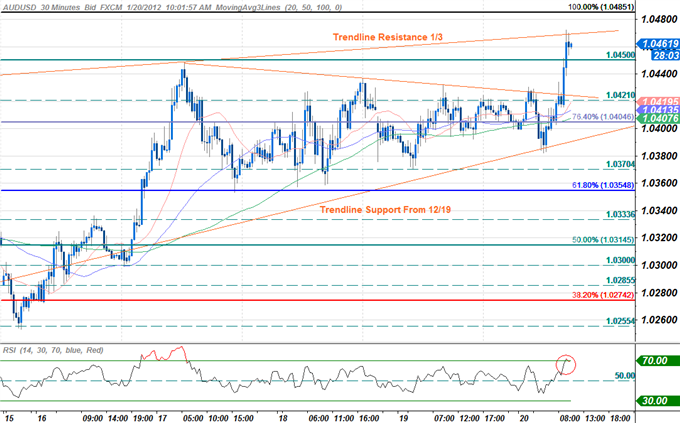 The Australian dollar is the top performing currency against a weaker greenback in early US trade with an advance of 0.43% on the session. Risk appetite improved at the open of trade in New York with the dollar coming under pressure as higher yielding assets advanced with the aussie breaching trendline resistance dating back to the January 17rd high before finding solace at trendline resistance dating back to the January 3rdt high. A breach here eyes subsequent ceilings at the 100% Fibonacci extension taken from the December 29th and January 8th troughs at 1.0485 and the 1.05-handle. A breach here risks substantial losses for the greenback as it would confirm a break above long-term daily trendline resistance dating back to the 2011 highs. Interim support now rests at 1.0450 backed by 1.0420 and the 76.4% extension at 1.0405. 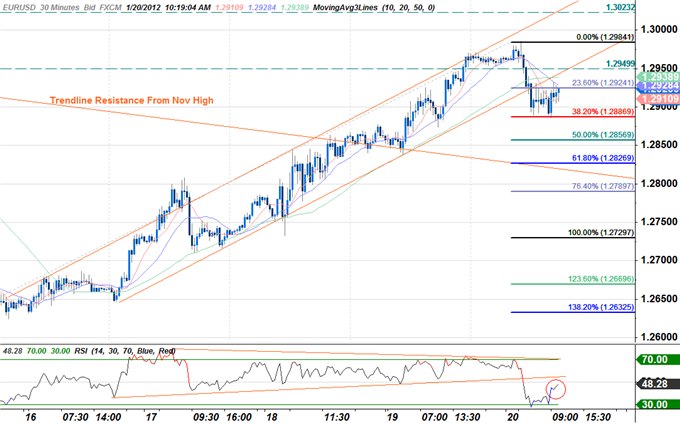 The euro is the weakest performer an hour into North American trade with the EUR/USD off by 0.35% on the session. The single currency broke below channel support dating back to the January 16th before rebounding off the 38.2% Fibonacci extension taken from the January 13th and the overnight highs at 1.2885. Mild bearish RSI divergence suggests the euro may be putting in an intermittent top here with downside targets held at the 50% extension at 1.2855, the 61.8% extension at 1.2825 and 1.2780. A break back above the 23.6% extension at 1.2925 encounters topside resistance at former channel support backed by 1.2985 and 1.0320. Note that a break above the 1.2985 high negates this scalp setup, with such a scenario requiring us to reconfigure this particular Fibonacci extension. A key test of former channel support is likely before heading lower with only a break below the 1.28-figure flipping our short-term bias to bearish.