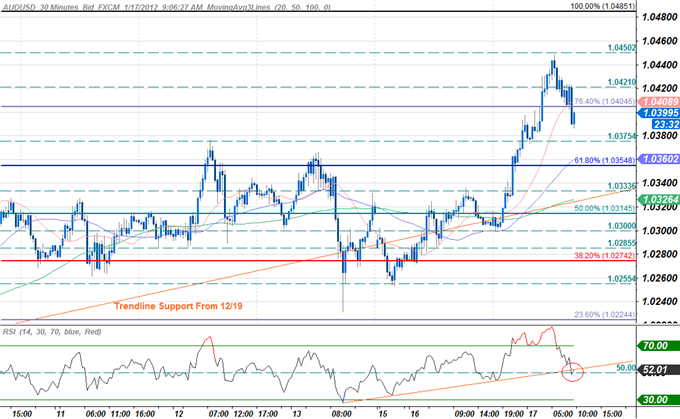 The Australian dollar is the top performing currency against a weaker greenback in early US trade with an advance of 0.83% on the session. Stronger than expected Chinese data overnight fueled a risk rally that carried over into European trade as growth concerns from the Asian juggernaut temporarily eased. Industrial production, real GDP, and retail sales figures all topped consensus estimates supporting the argument that China has effectively achieved a soft landing. Accordingly, risk has gone back on the offensive with equity markets and higher yielding currencies outperforming across the board.

The AUD/USD pair breached key resistance at the 61.8% Fibonacci extension taken from the December 29th and January 8th troughs at 1.0355 before rebounding off soft resistance at 1.0450. The aussie is likely to remain well supported throughout the US session as markets continue to rally on eased growth concerns. Interim support for the pair rests at 1.0375 backed by the 1.0355, 1.0333, and the 50% extension at 1.0315. Topside resistance now stands at the 76.4% extension at 1.0405 with subsequent ceilings seen at 1.0420 and 1.0450. Overnight traders will be eyeing data out of Australia with the Westpac consumer confidence surveys and new motor vehicle sales on tap. 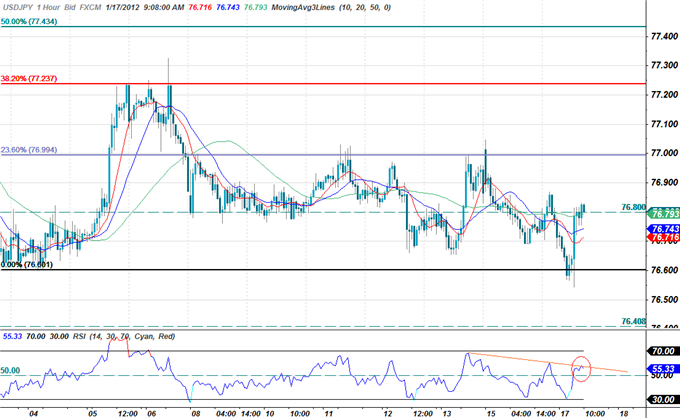 The Japanese yen is the weakest performing currency ahead of the open with the low yielder falling against all its major counterparts. As risk appetite improves the “haven” currency is likely to remain under pressure as investors jettison the yen in favor of higher yielding, growth linked assets. Against the dollar, the yen is only off by a mere 0.04% as yen losses modestly outpace those of the greenback. Overnight the pair made fresh 2012 lows below 76.60 before quickly pulling back to trade above the 76.80 level. We continue to like this pair higher on risk-on days with interim resistance now eyed at the 23.6% Fibonacci extension taken from the November 18th and January 4th troughs at the 77-figure backed by the 38.2% extension at 77.25 and the 50% extension at 77.45. Support rests at 76.60 with a break below eyeing subsequent floors at 76.40 and 76.15. Again we note that yen advances are likely to remain tempered on intervention concerns as a stronger yen continues to weigh on Japan’s export driven economy. Overnight traders will be eyeing data out of the isle-nation with industrial production and capacity utilization figures on tap.