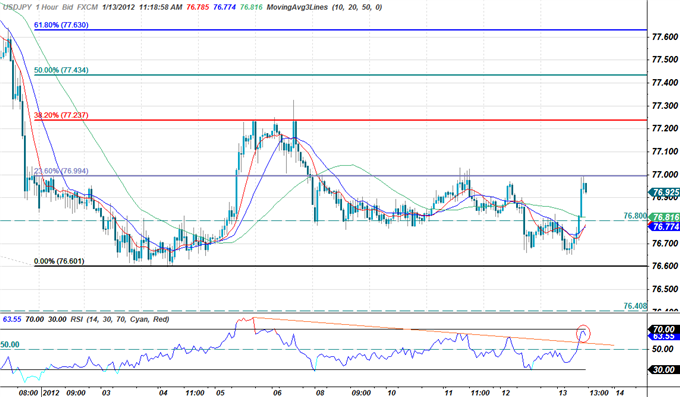 The Japanese yen is the strongest performing currency against a significantly stronger dollar with the USD/JPY pair off by just 0.27% in early US trade. Reports of possible European sovereign downgrades from rating agency Standard & Poor’s slammed broader market sentiment with classic haven flows dominating the first half of the session in New York. Although there has been no confirmation of the downgrades, as it stands France, Spain, Italy, Belgium, Portugal, and Austria are expecting a downgrade of some magnitude later today. The yen, which also benefits from risk aversion flows, advanced against all its major counterparts save the dollar as intervention concerns continue to temper yen advances against the reserve currency.

The USD/JPY broke back above soft resistance at 76.80 before encountering stronger resistance at the 23.6% Fibonacci extension taken from the November 18th and January 4th troughs at the 77-figure. A breach here eyes subsequent ceilings at the 38.2% extension at 77.24 and the 50% extension at 77.45. Interim support now rests at 76.80 backed by 76.60 and 76.40. Look for the pair to continue to trend higher as dollar advances outpace those of the yen on continued risk aversion, with a substantial shift in risk appetite likely to weigh on the reserve currency. 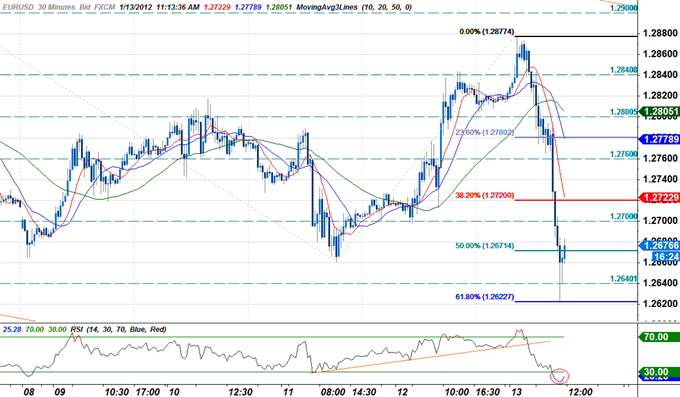 The euro is the weakest performer against the greenback with the EUR/USD off by more than 1.12% just after the close of European trade. Downgrades to sovereign ratings in the region have been widely expected with a downgrade to France, the region’s second largest economy, having the largest impact on the single currency. At this point the market may have largely priced in a French downgrade with this morning’s price action moving the euro a staggering 208% of its daily average true range.

The pair broke below the 23.6% Fibonacci extension taken from the January 3rd and the overnight highs at 1.2780 before sharply rebounding off the key 61.8% Fibonacci extension at 1.2623. The single currency is likely to remain under pressure with a rebound off the 50% extension at 1.2670 eyeing support targets at 1.2640, 1.2623, the 1.26-handle and the 76.4% extension at 1.2560. Interim resistance stands at the 1.27-figure with subsequent ceilings seen at the 38.2 extension at 1.2720, 1.2760, and the 23.6% extension at 1.2780. Note that in-light of today’s sharp decline the pair is likely to remain in consolidation until confirmation of the downgrades hit newswires. However with trade thinning out ahead of a long holiday weekend in the US, the euro could still come under significant pressure should the downgrades be more substantial than expected.