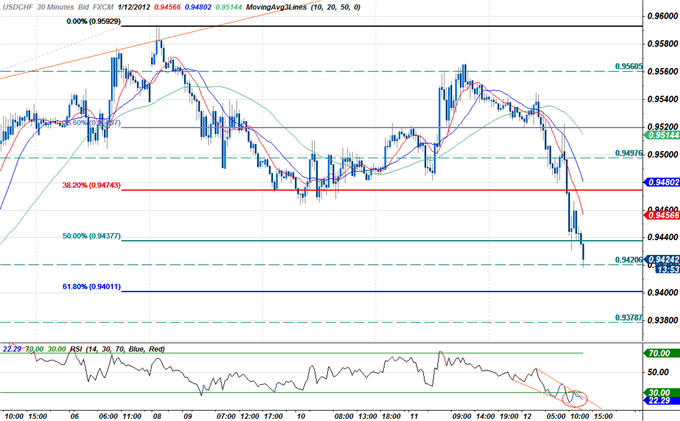 The USD/CHF broke below key support at the 38.2% Fibonacci extension taken from the December 15th and January 8th crests at 0.9475 before encountering soft support at the 0.9420 level. A breach here eyes subsequent floors at the 61.8% extension at the 0.94-figure, 0.9380, and the 76.4% extension at 0.9355. Topside resistance is now eyed at 0.9340 backed by the 38.2% extension at 0.9475 and the 0.95-handle. Watch for the swissie to remain well supported as the euro advances, with a reversal in the single currency likely to see the dollar mount a counteroffensive here. 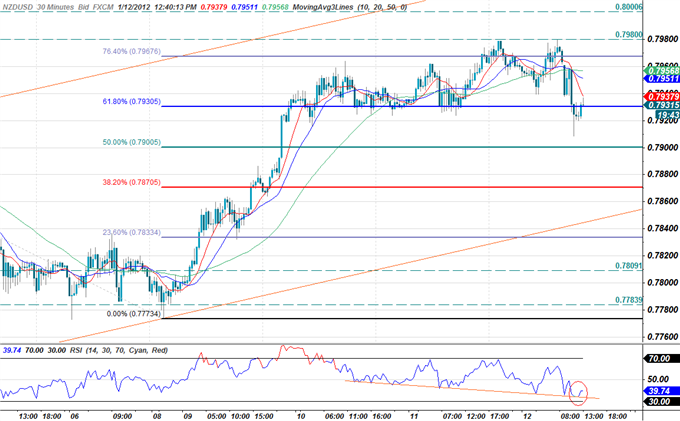 The New Zealand dollar is the weakest performing currency in afternoon trade with the NZD/USD off by 0.44% on the session. The kiwi which has outperformed its major counterparts over the past few sessions pared a portion of its recent advance, with the pair finding solace around the 61.8% Fibonacci extension taken from the December 29th and January 8th troughs at 0.7930 after failing two breach attempts above 0.7980. Subsequent support targets are held at the 50% extension at the 0.79-figure, and the 38.2% extension at 0.7870. The kiwi has continued to trade within the confines of an ascending channel formation dating back to the 15th of December with a break below the channel support targeting the 23.6% extension at 0.7835 and the 0.78-handle.Topside resistance holds at 0.7980 backed by the 0.80-handle.