UK Data Weighs on Sterling Ahead of BoE- US Dollar Rebounds 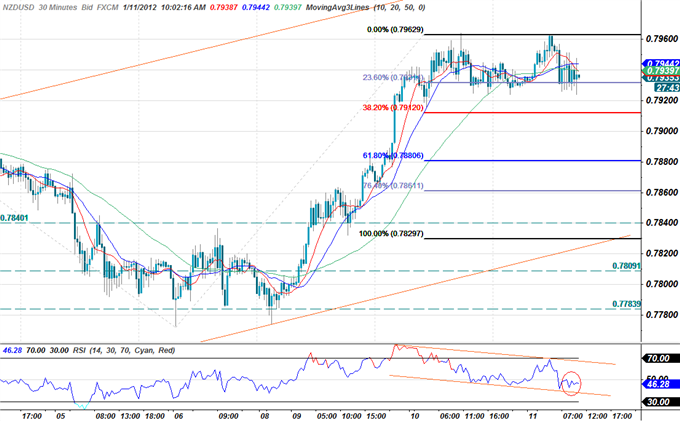 The New Zealand dollar is the top performer against a stronger greenback in early US trade with the pair posting a fractional gain of just 0.03%. The kiwi has continued to hold its ground above the 23.6% short-term Fibonacci extension taken from the January 3rd and 10th crests at 0.7930. The NZD/USD has remained within the confines of an ascending channel formation dating back to December 15th with the volatility in the high yielder lagging all the majors, moving just 47% of its daily average true range. A break below interim support eyes subsequent targets at the 38.2% extension at 0.7910 and the 61.8% extension at 0.7880. A move below this level risks further losses for the kiwi with such a scenario eyeing floors at the 76.4% extension at 0.7860 and 0.7840. Topside resistance holds at 0.7960 backed by the 0.80-figure and channel resistance, currently around the 0.8020-level. Overnight traders will be eyeing data out of New Zealand with ANZ commodity prices on tap. 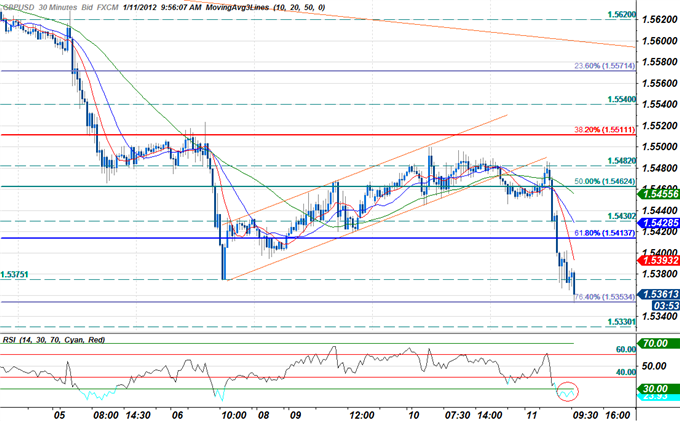 The British pound is the weakest performer against the dollar with the pair off by more than 0.74% an hour into US trade. The pair broke below a short-term ascending channel formation in afterhours trading yesterday as the sterling pared some of the day’s gains. Weaker than expected November trade balance figures have continues to weigh heavily on the pound after the report printed a total trade deficit of £2566 million, missing calls for a deficit of £2400 million. Traders remain reluctant to hold pounds ahead of tomorrows jam packed economic docket which is highlighted by the BoE and ECB interest rate decisions. Also on the docket are key industrial and manufacturing production figures and the December GDP estimate.

The sterling broke below key support at the 61.8% Fibonacci extension taken from the December 21st and January 3rd crests at 1.5413 before tagging interim support at the 76.4% extension at 1.5350. A likely break here eyes subsequent floors at 1.5330, the 1.53-figure, and the 100% extension at 1.5255. Interim topside resistance now stands at 1.5375 backed by 1.5413 and 1.5440. Traders will be closely eying any remarks made by central bank officials as data out of the UK continues to threaten the recovery. Look for the sterling to come under pressure should the MPC decide to increase the size of the £275B asset purchase program. Interest rates are widely expected to remain unchanged at 0.50%.