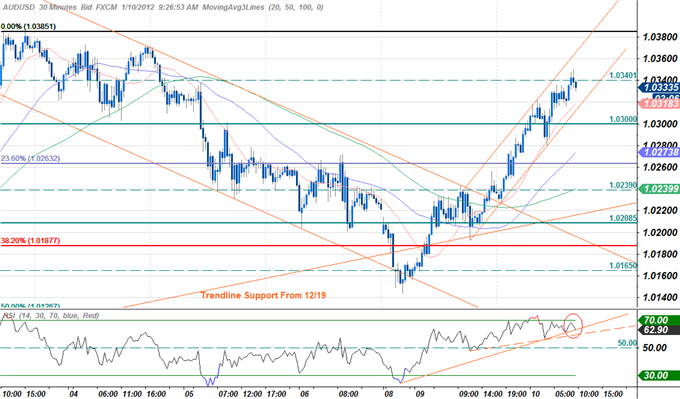 The Australian dollar is the top performing currency against a weaker greenback in early North American trade with an advance of 0.92%. Risk appetite significantly improved in European trade after rating agency Fitch cited that a French downgrade is not expected in 2012, easing concerns that the regions second largest economy may encounter funding problems down the road. Stronger than expected data out of France also helped fuel the overnight rally with manufacturing and industrial production data topping consensus estimates for the month of November. As a result, the risk trade seems to have gathered pace with the high yielding aussie continuing to be the chief beneficiary of risk-on trades.

The AUD/USD broke above the 1.03-figure in the overnight session before rebounding off the 1.0340 level in pre-market trade. Interim resistance holds here with subsequent ceilings eyed at the 2012 high at 1.0385 and 1.0425. Interim support rests at the 1.03-handle with a break here eyeing support targets at the 23.6% Fibonacci extension taken from the December 8th and January 3rd crests at 1.0263, 1.0240, and 1.0208. Look for the aussie to hold this range so long as broader market sentiment remains well supported. Our medium-term outlook remains weighted to the downside with a break below the short-term ascending channel formation targeting subsequent support levels. Overnight traders will be eyeing data out of Australia with the November job vacancies on tap. 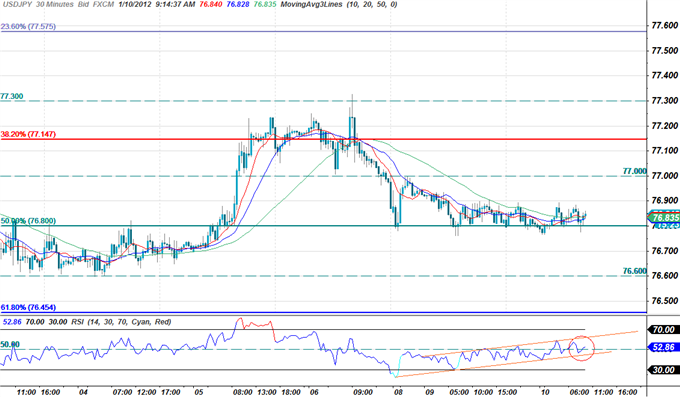 The Japanese yen is the weakest performer against the dollar with a fractional decline of just 0.02% in early US trade. The yen has continued to hold a tight range above the 50% Fibonacci extension taken from the October 31st and November 28th crests at 76.80. The yen is likely to continue to underperform as investors chase higher yielding assets with the yen falling against all its major counterparts save the dollar. Again we note that yen advances are likely to remain tempered as intervention concerns limit gains, with the USD/JPY expected to hold its recent range. A break below interim support eyes subsequent floors at 76.60 and the 61.8% Fibonacci extension at 76.45. Resistance holds at the 77-figure backed by the 38.2% extension at 77.15 and 77.30. Stronger resistance is eyed at the 23.6% extension at 77.55. We remain neutral on the pair as prices continue to hold and extremely tight range. Overnight investors will be closely eyeing data out of Japan with the December official reserve assets and the November coincident and leading indexes on tap.